We analyzed data from Yucatan mini pigs implanted with 3x18mm Ultimaster metallic stent (strut thickness:85µm)(n=6) and 3×18mmMirage Bioresorbable scaffold (BRS) (strut thickness:105µm) (n=6). InUltimaster group, 6 coronary arteries were implanted with a single Ultimasterstent in three animals. In Mirage group, six coronary arteries were implanted with a single Mirage BRS in six animals. Study protocol was approved by the Institutional Animal Care and Use Committee of the testing facility (AccelLABInc., Canada) and were in compliance with the Canadian Council on Animal Care regulations. Animal husbandry, medication administration, and stent implantation were performed according to standards. OCT was performed before and after scaffold implantation in all treated coronary arteries, using a frequency-domain OCT system (C8-XR OCT IntravascularImaging System; St. Jude Medical, USA). Coronary artery reconstruction was conducted implementing a validated methodology. In x-ray angiographic and OCT images, the anatomical landmarks (i.e. side branches) and the radiopaque markers identified both on angiography and OCT, were used to define the scaffolded segment and proximal-distal native vessel segments. In the region of interest (ROI), theOCT images portraying the scaffolded and the proximal-distal non-scaffolded native vessel segments were identified and analyzed at a 100 micron (µm)interval. Two post-procedure end-diastolic angiographic images with at least25º-angle difference showing the ROI with the table in the isocenter were selected. In these images, the luminal borders were delineated for ROI and processed to extract the luminal centerline which was then used for 3D luminal center line of the ROI. The borders of flow area identified on OCT images were then mounted perpendicularly onto the luminal centerline. Following 3D reconstruction of the coronary arteries, endothelial shear stress(ESS) was quantified using Newtonian steady flow simulation in each cross-section in 5-degreesu bunit(sector) of the circumferential luminal surface in CFD models.  Mixed effects models have been implemented for statistical analysis. 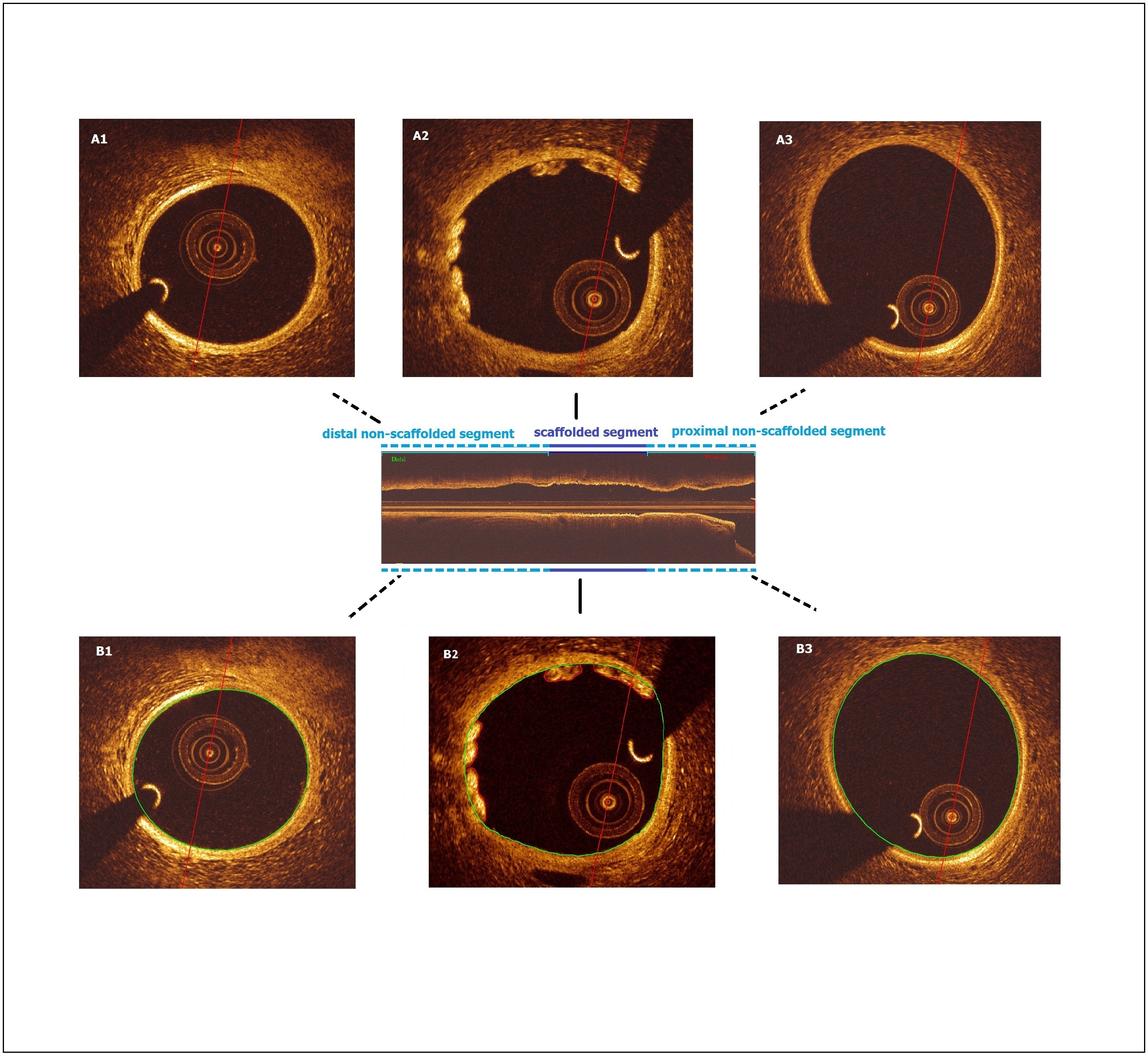 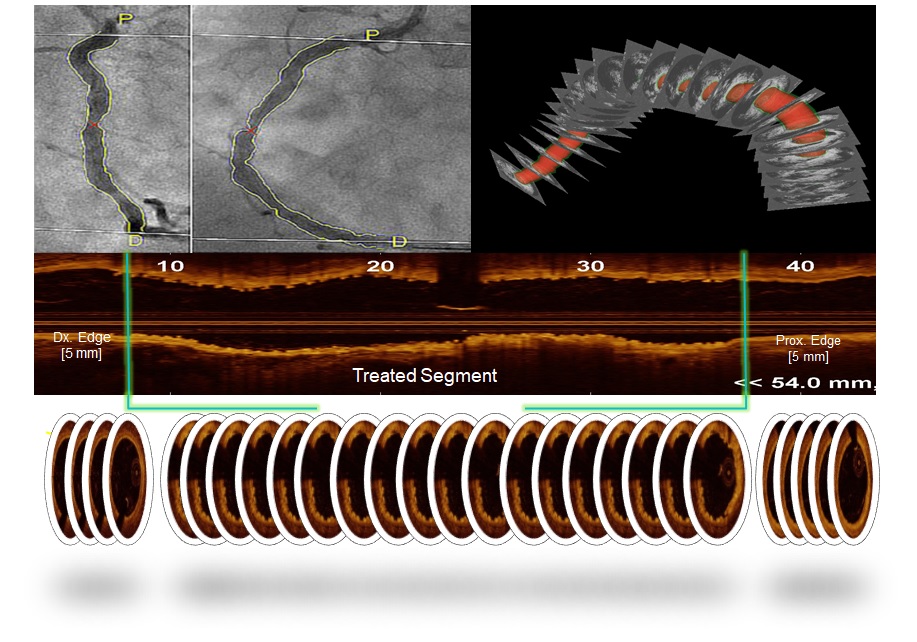 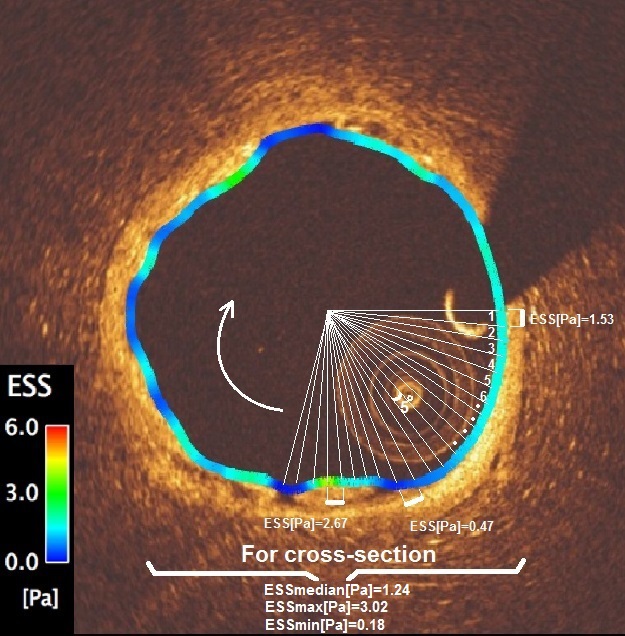 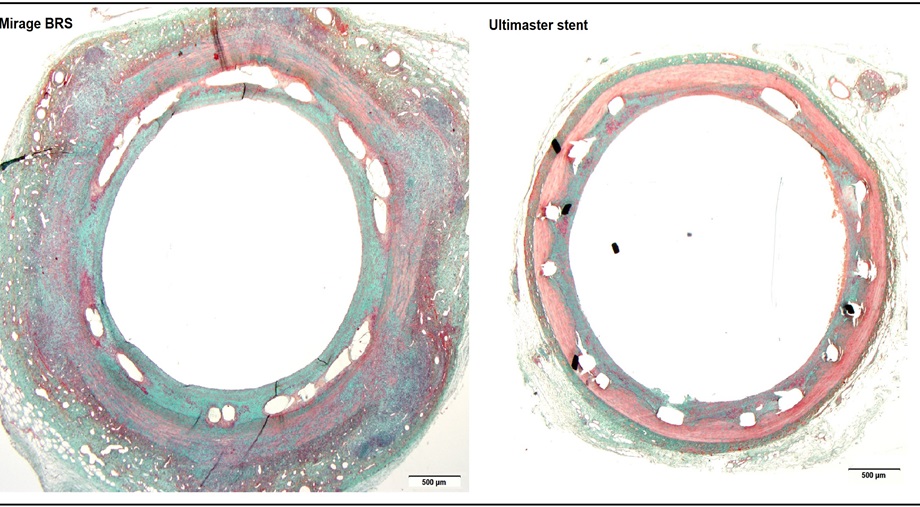 Invivo 3D-OCT based modeling can be used to evaluate the implications of scaffold configuration on the local hemodynamic forces. The ovoid thin struts, with a helicoidal alignment of the Mirage BRS (Figure-1) appear to have a minimal implication on the ESS patterns compared to the rectangular shaped struts of the Ultimaster metallic stents with a zig-zag with hoops alignment. New thinner version of Mirage bioresorbable scaffold demonstrated similar local micro-hemodynamics with metallic Ultimaster stent. Despite thinner quadraticstruts of Ultimaster, the circular struts of Mirage caused less flow disruption (Figure-2). Further research is required to examine the potential value of the in vivo computational modeling in optimizing scaffold configuration and clinical outcomes. Clinical studies currently conducted, attempt to duplicate the preclinical results Further investigations will demonstrate whether these subtle changes in hemodynamic microenvironment will have clinically significant repercussion on clinical outcome at long term. 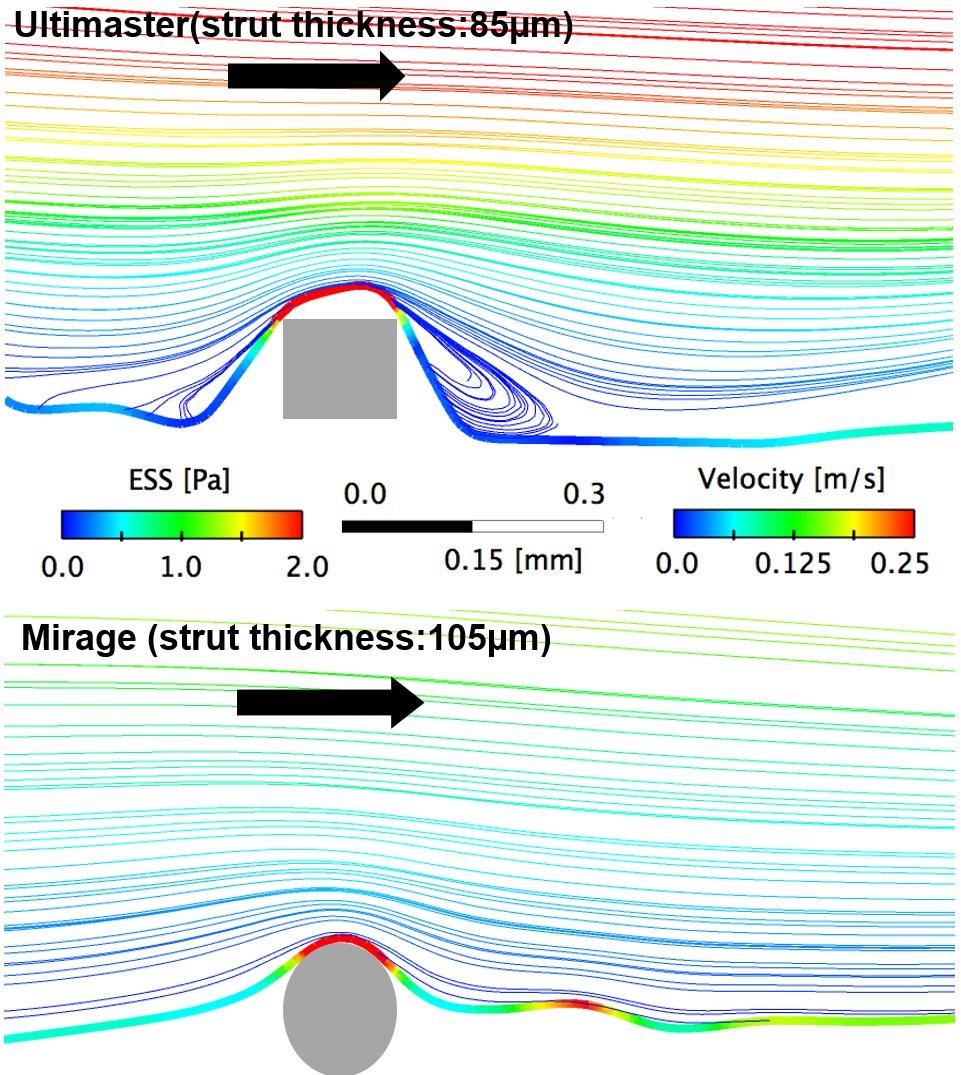