The Jackson Heart Study showed that visceral adipose tissue (VAT) is associated with an increased risk of heart failure (HF); however, little is known about the mechanisms underlying this relationship.This study aimed to elucidate the relationship between VAT, coronary artery calcification (CAC), and incident HF. We used causal mediation analysis to investigate whether CAC mediated the effect of VAT on HF.

This was a retrospective analysis of the longitudinal follow-up data of the JHS. The participants underwent initial examination at a baseline clinic between 2000 and 2004 and were followed up once each between 2005 and2008 and between 2009 and 2013. Participants with a history of heart failure or who refused to disclose their medical history on visits 1–2 were excluded. Annual follow-ups were done by telephone to update information about medical events, hospitalizations, functional status, and additional sociocultural data.CAC was evaluated using a16‐channel multidetector CT system equipped with cardiac gating during visit 2 at the JHS Computed TomographyData Acquisition Center located at the Jackson Medical Mall. Agatston scoring was used for CAC at a threshold of 130 Hounsfield units and minimum lesion size of1 mm2. Agatston scores > 0 indicated the presence of CAC. The entire CT protocol for the JHS included The CT images for measuring VAT included a series of lower abdominal examinations detected by the same CT system used for CAC.In the JHS cohort, the surveillance started from January 1, 2005, to December 31, 2012, and was performed by trained medical professionals using hospital medical records and autopsy reports. HF hospitalization was defined based on symptoms, physical findings, and diagnostic procedures. Cumulative HF hospitalization data were obtained from the hospital discharge index from all catchment area hospitals and annual follow-up information. Hospitalization data from non-catchment area hospitals were obtained after participant consent.

A total of 1952 participants (mean age, 59.9 years; 35.1%, men) who had received CAC and VAT quantification by computed tomography and had no prevalent HD in the Jackson Heart Study were investigated. Multivariable-adjusted linear regression models investigated the association between measures of VAT and CAC. Cox proportional hazard models were used to estimate hazard ratios of VAT and CACfor HF by adjusting for age, sex, hypertension, diabetes, and statin medication status. VAT was associated with CAC (β coefficient, 0.114 ± 0.053; p=0.031). IncreasedCAC and VAT were associated with a higher risk of incident HF (adjusted hazard ratio, 1.126; 95% CI, 1.038–1.221; p < 0.001 and adjusted hazard ratio, 1.217;95% CI, 1.014–1.461; p = 0.035, respectively). CAC was a significant mediator of the relationship between VAT and heart failure, with a mediation proportion of 5.68%. 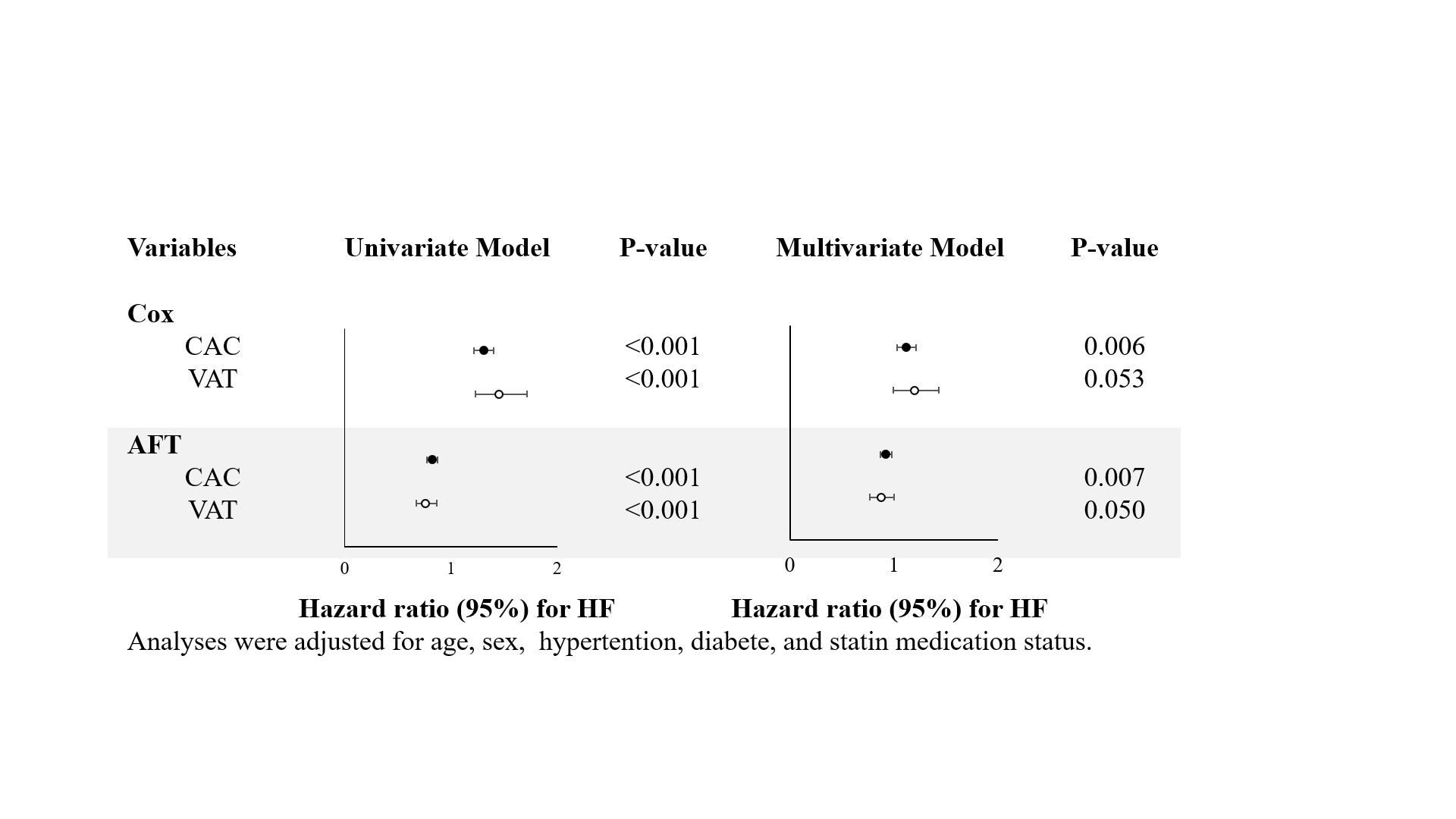 VAT may contribute to HF development, partly through the effects of atherosclerosis. HF can be prevented by targeting VAT and considering the presence of CAC in African American patients.