Impact of Geographic Disparity on 10-year Mortality in the SYNTAXES Trial, According to the SYNTAX Score II 2020 and Applying Machine Learning (Gradient Boosting Model)

Impact of Geographic Disparity on 10-year Mortality in the SYNTAXES Trial, According to the SYNTAX Score II 2020 and Applying Machine Learning (Gradient Boosting Model)

Treatment outcome following revascularization of complex coronary artery disease differs between countries. The aims of the present study were to evaluate the impact of geographic disparity on all-cause death at 10 years.

The design and the primary results of the SYNTAX study have been reported previously. Briefly, all-comer patients with de novo 3 vessel disease and/or left main coronary artery disease deemed to be eligible for both PCI and CABG were enrolled and randomized to either CABG (n= 897) or PCI (n=903) with the TAXUS drug-eluting stent (Boston Scientific, Marlborough, MA, USA). The SYNTAXES study aimed to evaluate10-year all-cause mortality in the SYNTAX trial. Patients (n=1800) were enrolled in North America (N-A, n=245), and Europe was subdivided into four regions: Eastern Europe (E-E, n=189), Northern Europe (N-E, n=425), Southern Europe (S-E, n=263), and Western Europe (W-E, n=678).

The SYNTAX score II 2020, combining comorbidity and anatomy, was significantly higher in N-A, S-E, and W-E when compared to the other regions (28.2±19.8 vs 24.1±16.7, p<0.001).Kaplan–Meier analysis showed that N-A and W-E had significantly higher mortality than the other regions (30.9% vs 22.0%, Log-rank P<0.001, figure 1). Landmark analysis showed no significant difference between the 5 groups in the first 5 years (Log-rank P=0.538), while a significant divergence of the survival curves was present between 5 to 10 years (Log-rank P<0.001, figure 2). In Cox regression analysis, enrollment in the high-risk region itself was an independent determinant of 10 years mortality (HR 1.259, 95%CI 1.033-1.533, P=0.023). The calibration plots of predicted versus observed all-cause mortality derived from the entire cohort (slope 0.98, intercept -0.024, c index0.73) show substantial overestimation in the two highest quartiles of N-A and W-E population whereas underestimations in the same quartiles documented for the other regions (E-E, N-E, and S-W) using SYNTAX score II 2020, that could be improved by machine learning (method: a gradient boosting model) including geography disparity (slope 0.99, intercept 0.026, c index 0.75, figure 3). 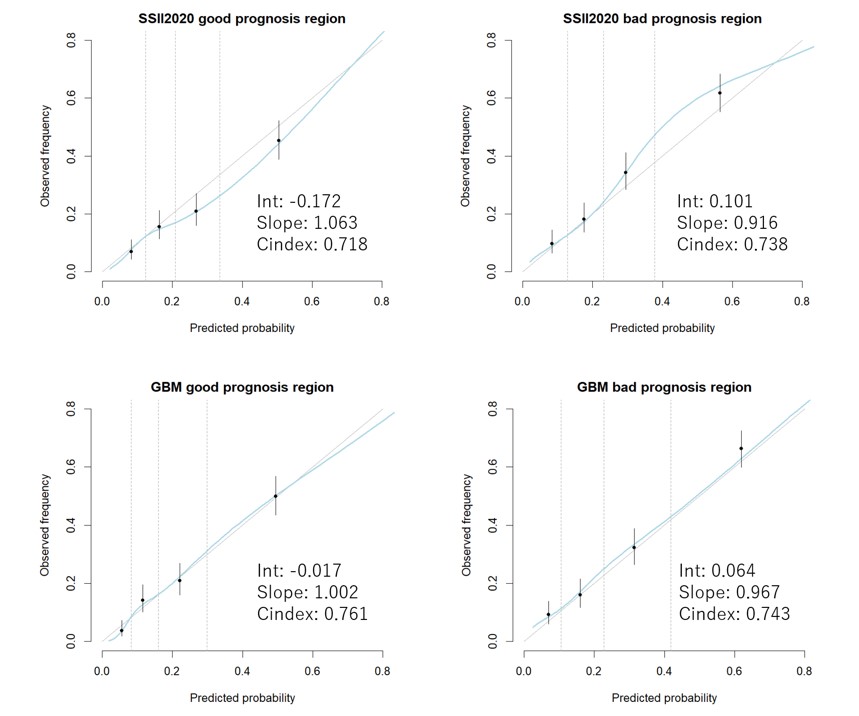 Geography is an independent determinant of the long-term prognosis of coronary artery disease following revascularization. N-A and W-E survival outcomes are worse than in the other European regions. Including geographic disparity, machine learning could predict the 10-year mortality of the intercontinental SYNTAX trial more accurately than the SYNTAX score II 2020.