Definition of elderly varies amongst countries worldwide especially in studies on percutaneous coronary intervention (PCI).    According to the guidelines, elderly was defined as patients more than 75 years of age which is the cut-off for this study.  PCI in the elderly carries high risk of morbidity and mortality. However with advent of newer generation of drug eluding stents, increase usage of radial access and better understanding of antithrombotic therapies, there has been a trend towards  reduction of cardiac mortality and improvement in quality of life. However , this group of patients are often excluded from most trials and there are lacking of data in regards to outcome and safety of PCI in this group.   Hence we aim to look mainly at the outcome and safety of PCI in this group.

This is an observational retrospective analysis. 1575 patients whose age was equal or more than 75 years old (5% of total PCI cases) admitted in the National Heart Institute from January 2007 till December 2017 were included in this study.  Patients' demographics, risk factors and procedural characteristics were evaluated.  Comparison was made with the patients of age less than 75 years old (main group) in terms of hospitalization and 1 year follow-up outcome. Multivariate logistic regression analysis performed with Kaplan-Meier survival graph plotted. 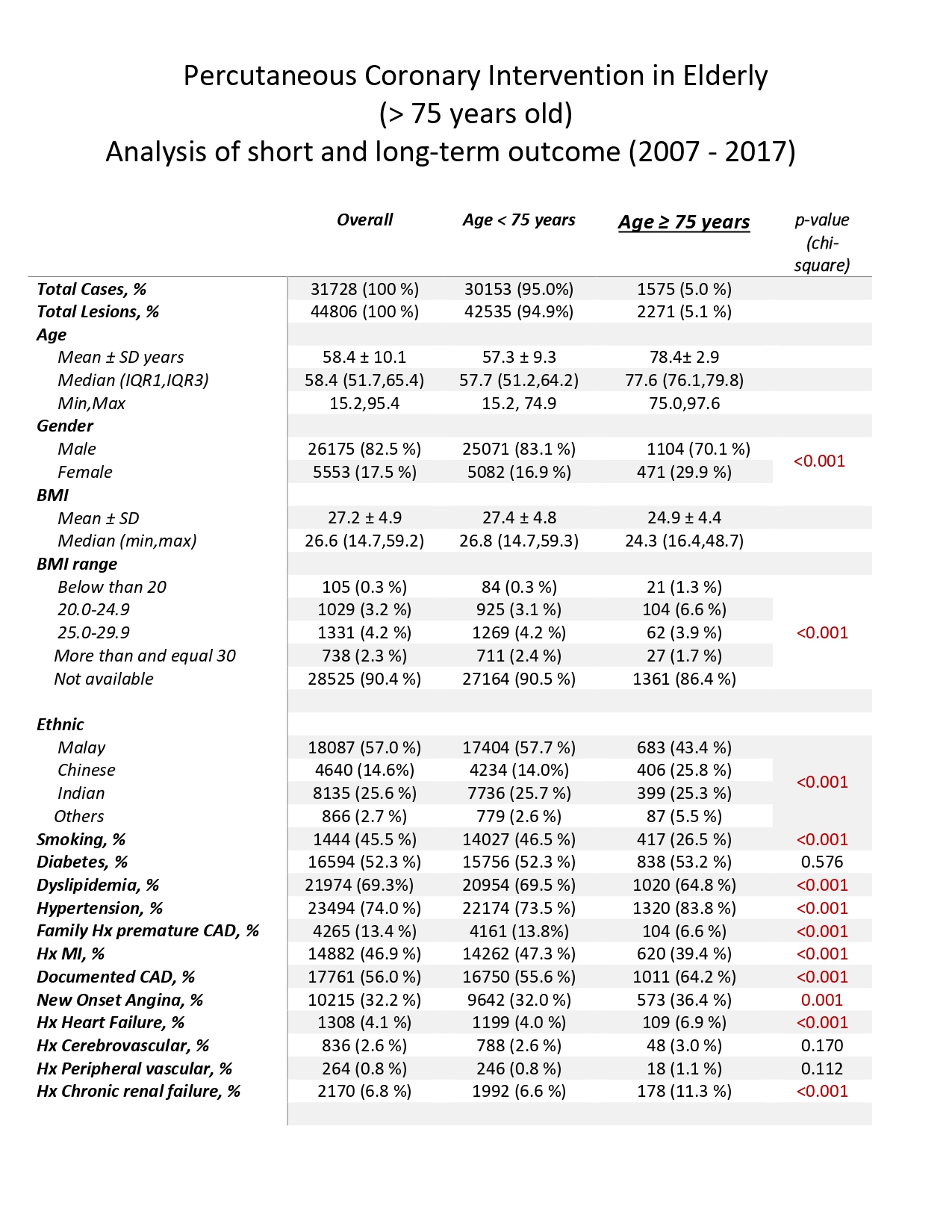 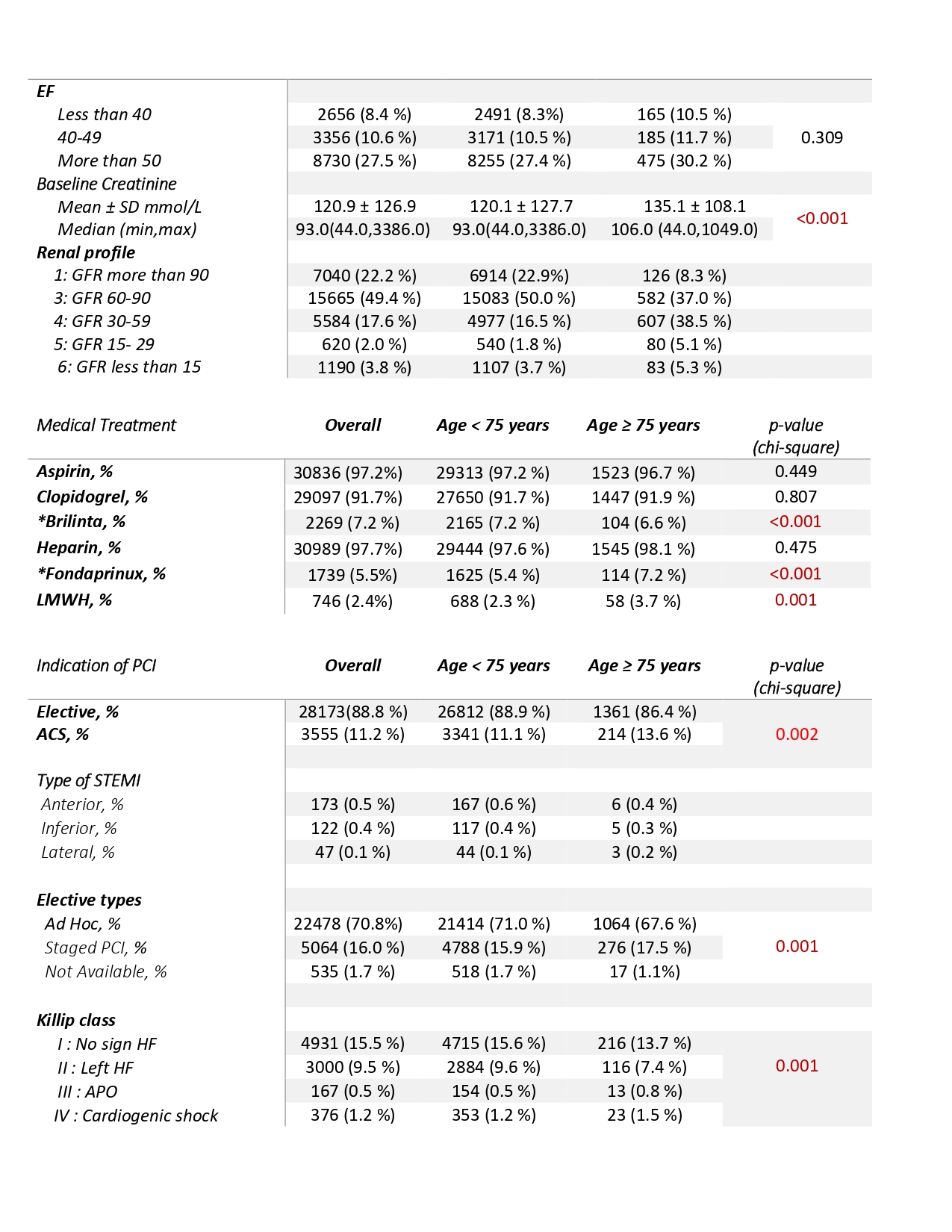 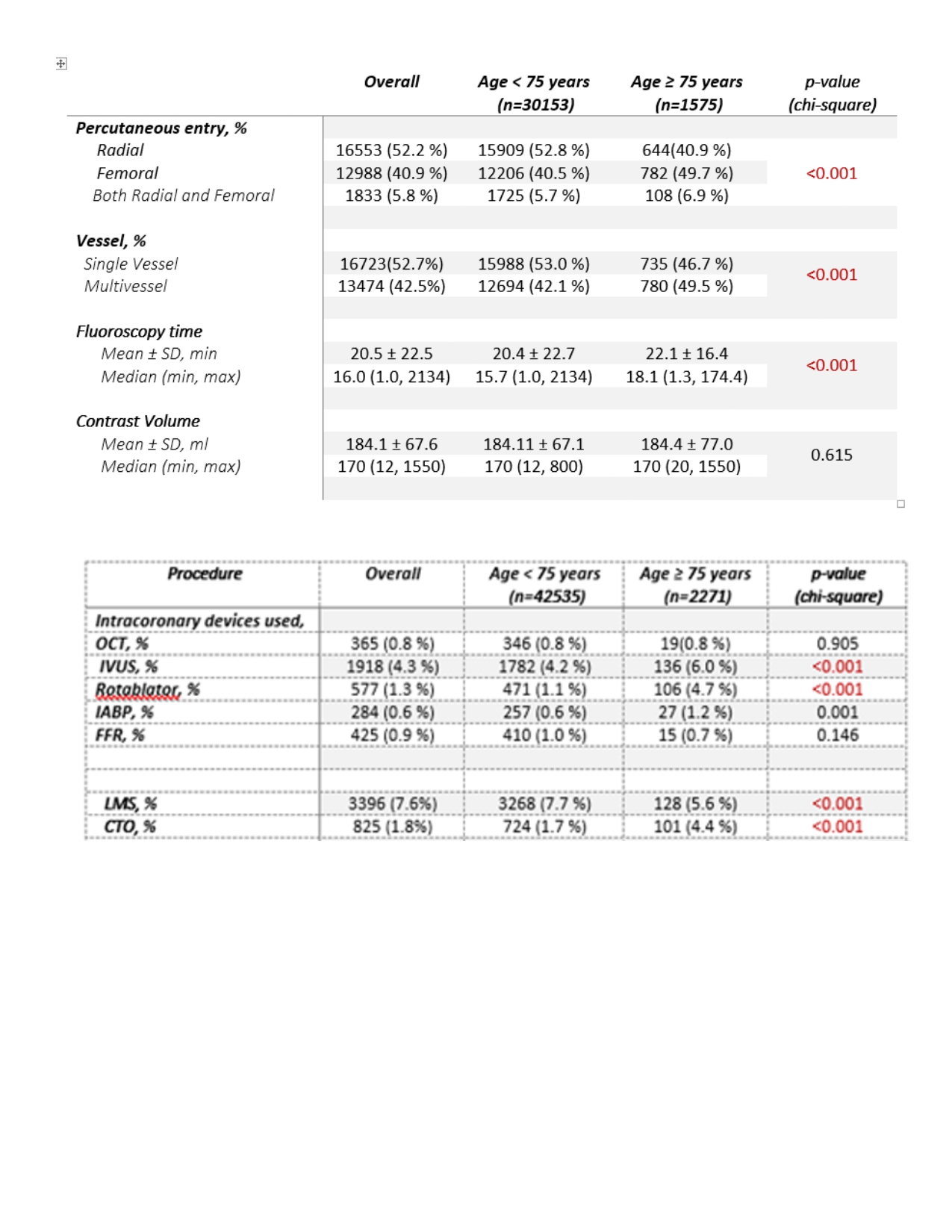 In our study, the elderly group had poorer outcome during in hospital stay and at follow up up till 1 year.  This finding is consistent with the J-PCI registry of more than half a million patients by Yohei Numasawa et al.  This is likely due to more patients having multi- vessel disease, significantly higher number of bleeding events  with femoral punctures in comparison with the main group and longer hospital stay.  Therefore, age does play an important prognostic role.  In contrast to other studies, the number of non cardiac deaths were lower than cardiac deaths in the elderly group.  This elderly group also consists of CHIP-PCI cases whereby patients have poor LVEF, chronic renal failure, significantly high CTOs, more use of IABP and rotational atherectomy.  Antithrombotic therapy was another interesting aspect of PCI in elderly as we noticed Ticagrelor (Brilinta) was used lesser but yet bleeding events were higher.  Use of drug eluting stents (DES) and drug coated balloons (DEB) were comparable between both groups. Generally, it is widely known that elderly patients are typically treated less aggressively compared to their younger counterparts due to the concern of higher mortality which is clearly seen in this study. However, decision to perform PCI should be individualized as there are other studies which have proven good long term outcomes especially in specific clinical situations such as STEMI  (PAMI-I, GUSTO-IIB and DANAMI-2 trials) and NSTEMI (TACTICS-TIMI 18). In regards to elective cases such as in our study, the TIME trial has taught us that there is still benefit in regards to relief of angina and improvement in quality of life.  In our study, most of the elective cases were symptomatic and had functional studies done to assess for ischemia before proceeding for PCI.  Overall, many societies such as AHA, ESC and SCAI have recommended patient-centered approaches for PCI in the elderly group therefore age should not be the sole factor in making such a crucial decision. 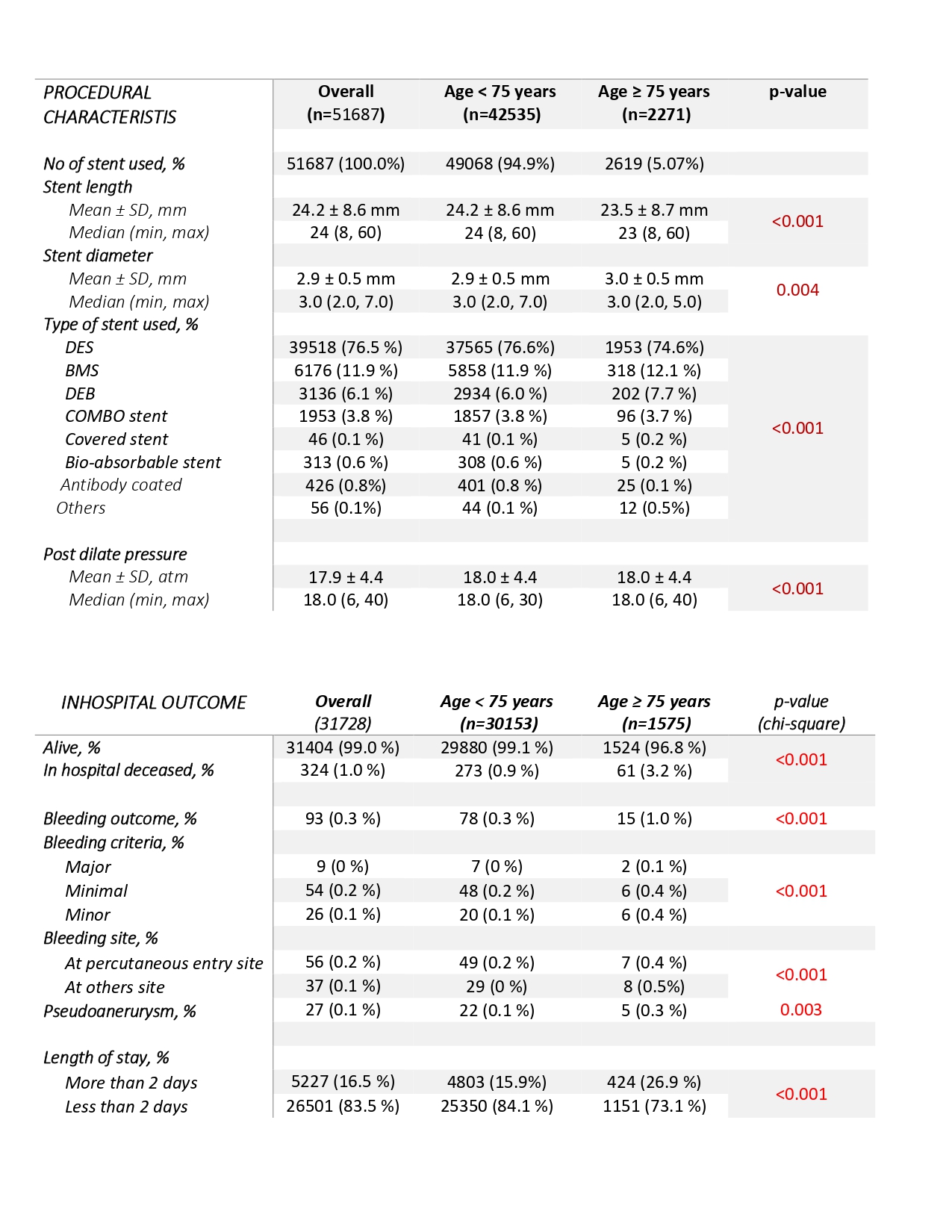 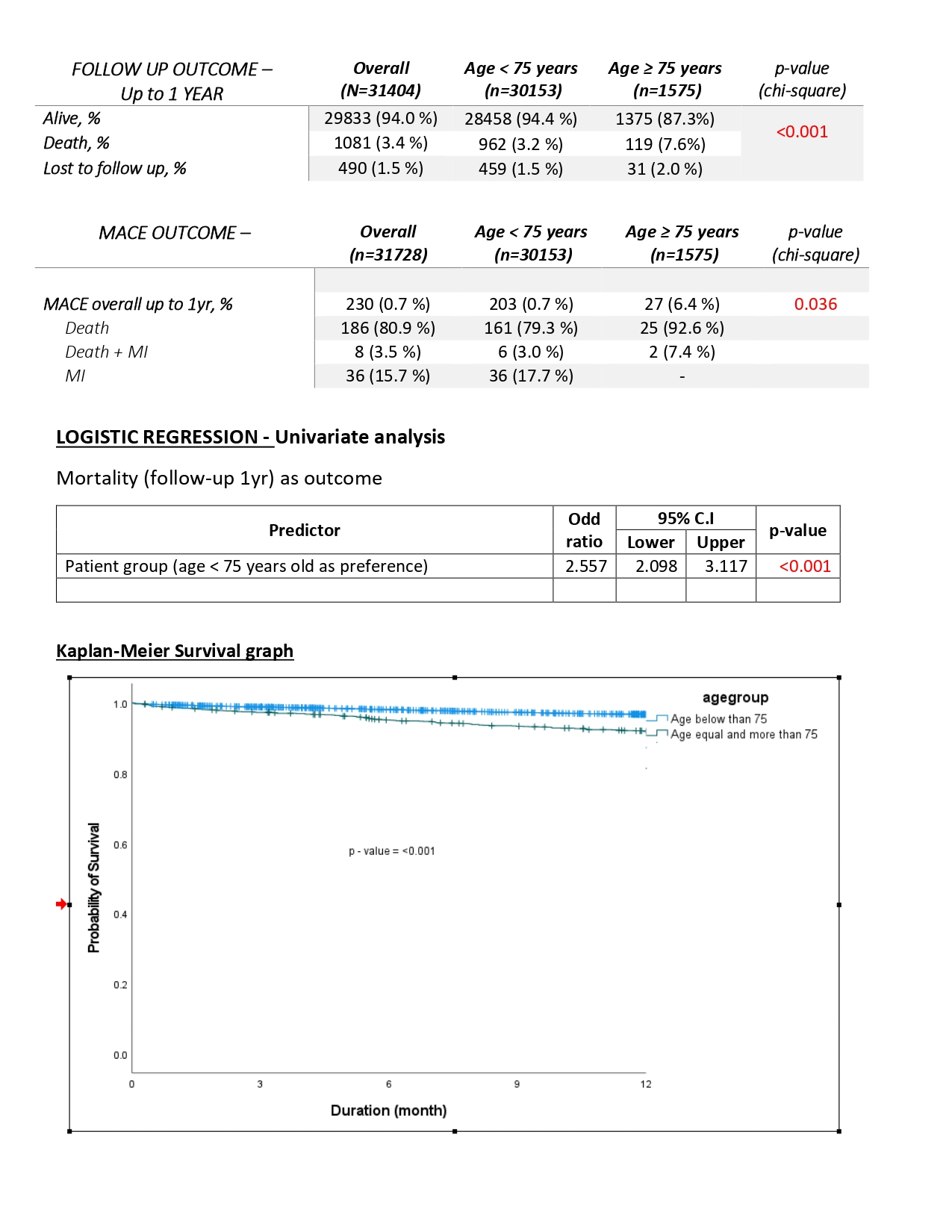