Rotational atherectomy (RA) or rotablation is an athero-ablative technology that enables percutaneous coronary intervention (PCI) of complex, calcified coronary lesions and is re-emerging with the advent of drug-eluting stents. The current best practices recommendations for RA with short ablation runs a ‘pecking’ motion, avoidance of sudden decelerations and the use of smaller burr sizes has led to substantial improvements in procedural safety and a reduced rate of associated complications. However, even in the era of the drug-eluting stents, the complications, but not limited to, such as death, peri-procedural myocardial infarction (PMI), dissection, perforation and slow-flow or no-reflow, still occur after RA, which have been linked to procedure-related morbidity and mortality. The incidence of RA related PMI range from 1 % to 19.8 %. Periprocedural myocardial infarction (PMI) leads to in-hospital and follow up major adverse cardiovascular events (MACE) when considering high risk patients and complex coronary lesion. Many studies have demonstrated that high burr speeds of more than 140 000 rpm cause significantly more activation of platelets, microcavitations and hemolysis. Therefore, recommendations on RA speed technique has also changed over time from conventional high-speed RA (HSRA), 180,000 to 200,000 rpm, to lower and safer range between 135,000 and 180,000 rpm. A recent study suggested that a new technique of using low-speed RA (LSRA) of 110,000 rpm following HSRA of 190,000 rpm have shown to attain larger lumen enlargement compared with conventional HSRA without significant occurrence of in-hospital complication between HSRA+LSRA and HSRA. This study aimed to compare the impact of two RA techniques (HSRA+LSRA vs. HSRA) on peri-procedural myocardial infarction or injury in patients with complex calcified coronary lesions and evaluate the immediate post-RA luminal gain between two RA techniques.

A prospective observational study was conducted that included all patients with complex coronary artery lesions who underwent LSRA after HRSA or conventional HSRA from January 2020 through March 2021 at Police General Hospital, Bangkok, Thailand. The troponin T with high sensitivity (hs-cTnT) measurement was performed before RA on admission in the department and 24 hours after the PCI. Preprocedural and peak postprocedural hs-cTnT values were used for the analysis. The immuno-analysis ECL-sandwich by Roche was used to measure hs-TnT with a lower limit of detection of 3 ng/L and a 99th percentile reference limit of 14 ng/L (upper reference limit or URL) in apparently healthy individuals. Using the "Fourth universal definition of myocardial infarction (2018)", the rise in postprocedural hs-cTnT level greater than five times the 99th percentile URL (i.e. 70 ng/L) in patients with normal pre-procedural baseline values or greater than 20% from the baseline elevated pre-procedural hs-cTnT value within 48 h after PCI with or without new ischemic electrocardiographic (ECG) changes was considered as a type 4a periprocedural myocardial infarction (PMI)  or periprocedural myocardial injury (PMJ), respectively.Angiographic data were evaluated by an independent investigator, unaware of the final outcomes and blinded regarding the procedures and Quantitative coronary angiography (QCA) was performed off-line using TomTec-Arena QCA Software. Intracoronary(IC) imaging was performed, using either Optical coherence tomography (OCT) or intravascular ultrasound (IVUS), after IC nitroglycerin injection (a) pre-RA (if the imaging catheter is passed across the lesion); (b) post-RA; and (c) post-stent (final) as illustrated in Figure 1. Multivariable binomial regression was used to identify risk difference (RD) and its 95% confidence interval (CI) of PMI/PMJ between HSRA+LSRA and HSRA group. Potential confounders of periprocedural myocardial injury or infarction based on previous studies and the significant different characteristic between 2 groups (HSRA+LSRA versus HSRA) were included in the final model. 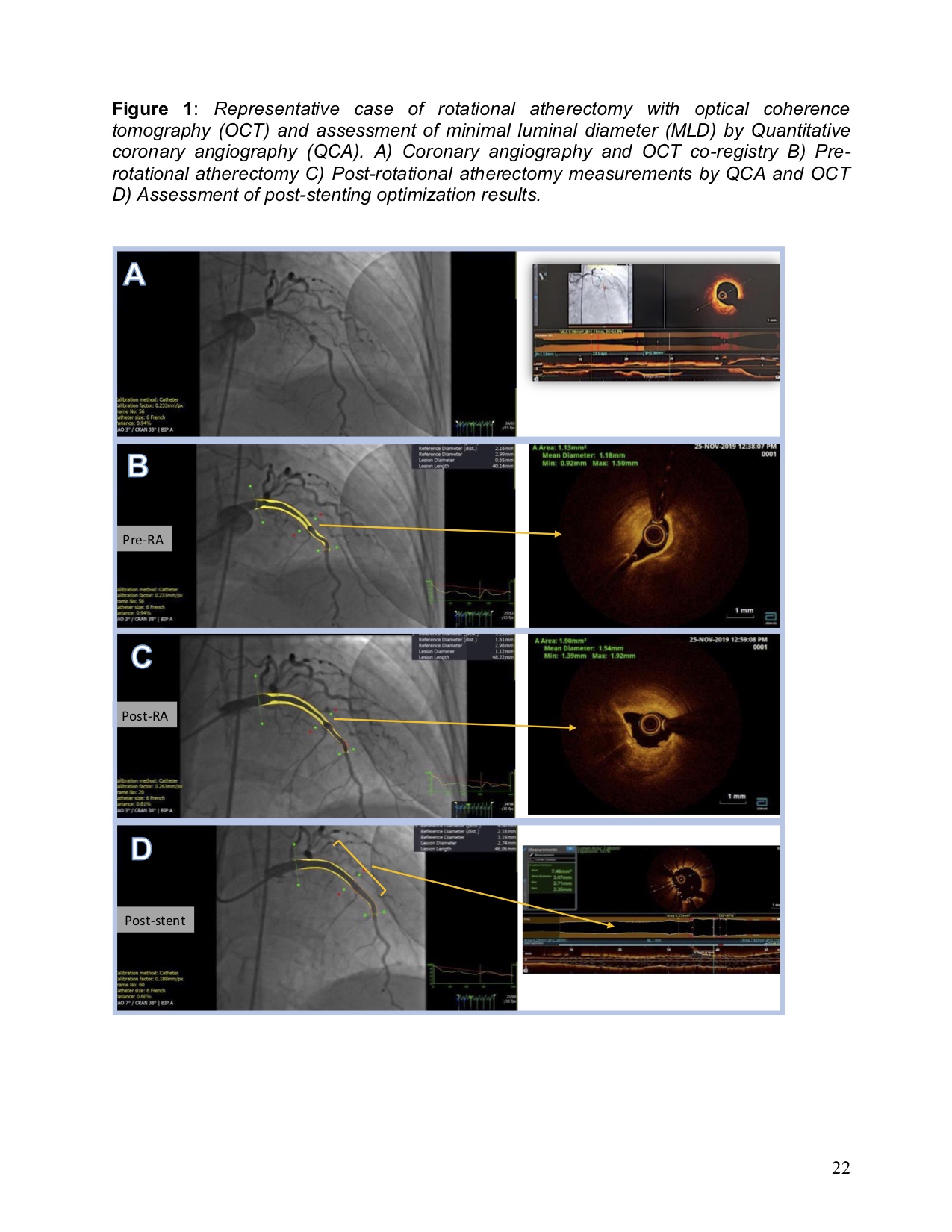 21 patients were eligible for inclusion however 9 patients had to be excluded from this study due to incomplete data such as blood hs-cTnT levels and complete intracoronary images. 12 patients were included for the final analysis.Baseline clinical characteristics of the patients, shown in Table 1, were similar with respect to age, cardiovascular risk factors, chronic renal failure and previous MI, however with relatively more male patients in the HSRA+LSRA technique group. Majority of the patients had the multi-vessel disease, HSRA+LSRA (100%) and HSRA (83%). There was no significant difference in terms of pre and post dilatation balloon use however novel technique resulted in larger diameter stents and post dilatation balloons. Overall long lesion coverage stents were used in this study, although no statistical significant difference in stent length between 2 study groups was observed (47.7 mm Vs 55.3mm; p=0.620), as shown in Table 2. Of 12 patients, 2 (16.7%) developed PMI and 7 (58.3%) developed PMJ. Higher cumulative of PMI and PMJ occurred in HSRA group 83% vs. 67% (Table 3). The final multivariable binomial regression analysis demonstrated that the HSRA+LSRA technique significantly reduced the risk of PMI or PMJ (adjusted risk difference 55%, 95% confidence interval [CI] 42% - 67%, p < 0.001) (Table 4). The covariates entered into the final model included age, gender, multivessel disease, lesion diameter stenosis, lesion length, number of stents, total stent length, burr to artery ratio and senior operator.Compared to HSRA, HSRA+LSRA had a larger post-RA luminal diameter (adjusted mean difference 0.35 mm, 95% CI 0.027 mm - 0.727 mm, p = 0.066) (Figure 2). QCA findings of pre- and post-RA are summarized in table 2. Immediate post RA acute luminal gain was not different in both groups. There was no significant difference in all 4 optimal stent result criteria between HSRA+LSRA and HSRA as demonstrated in Table 5. 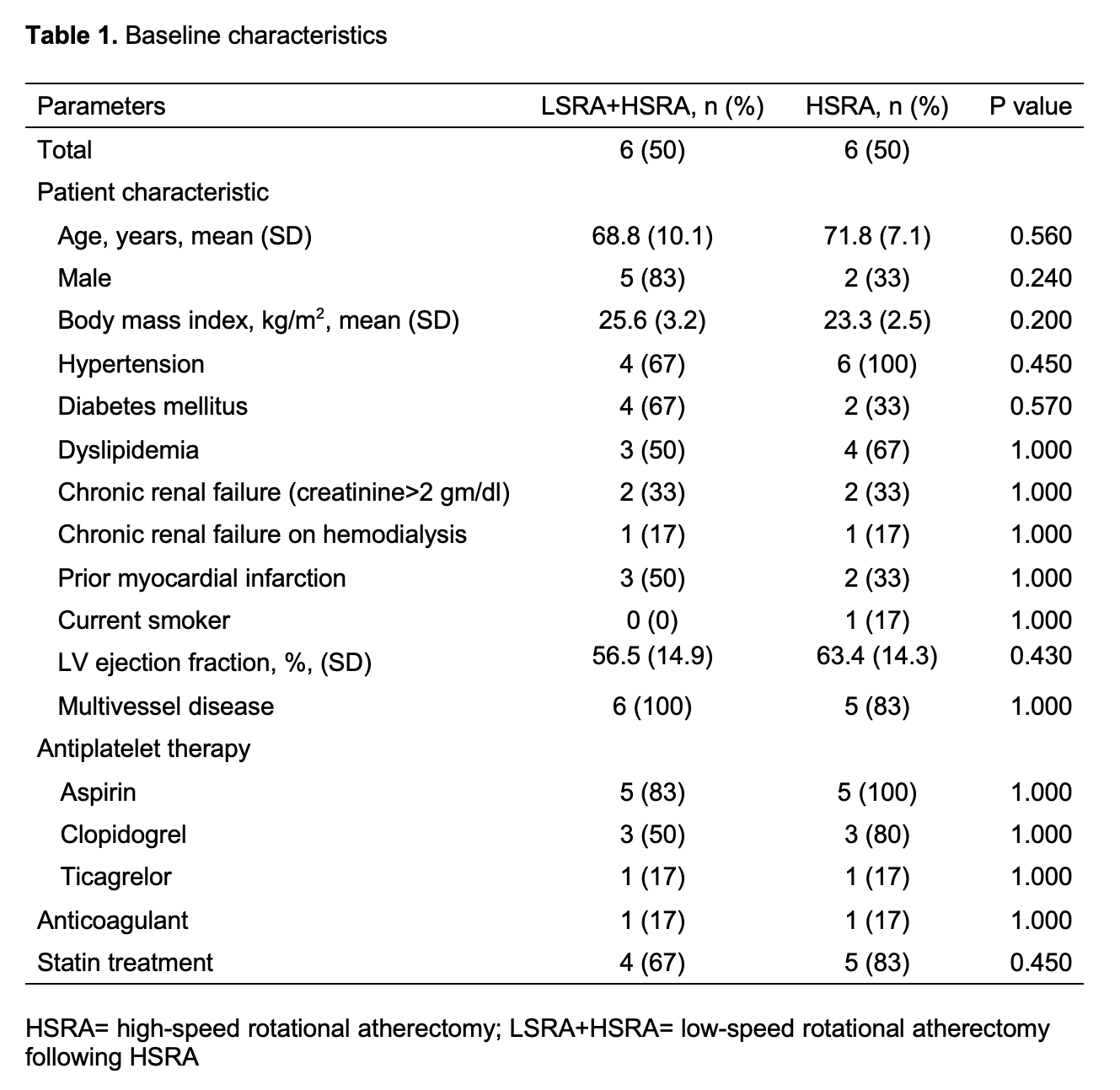 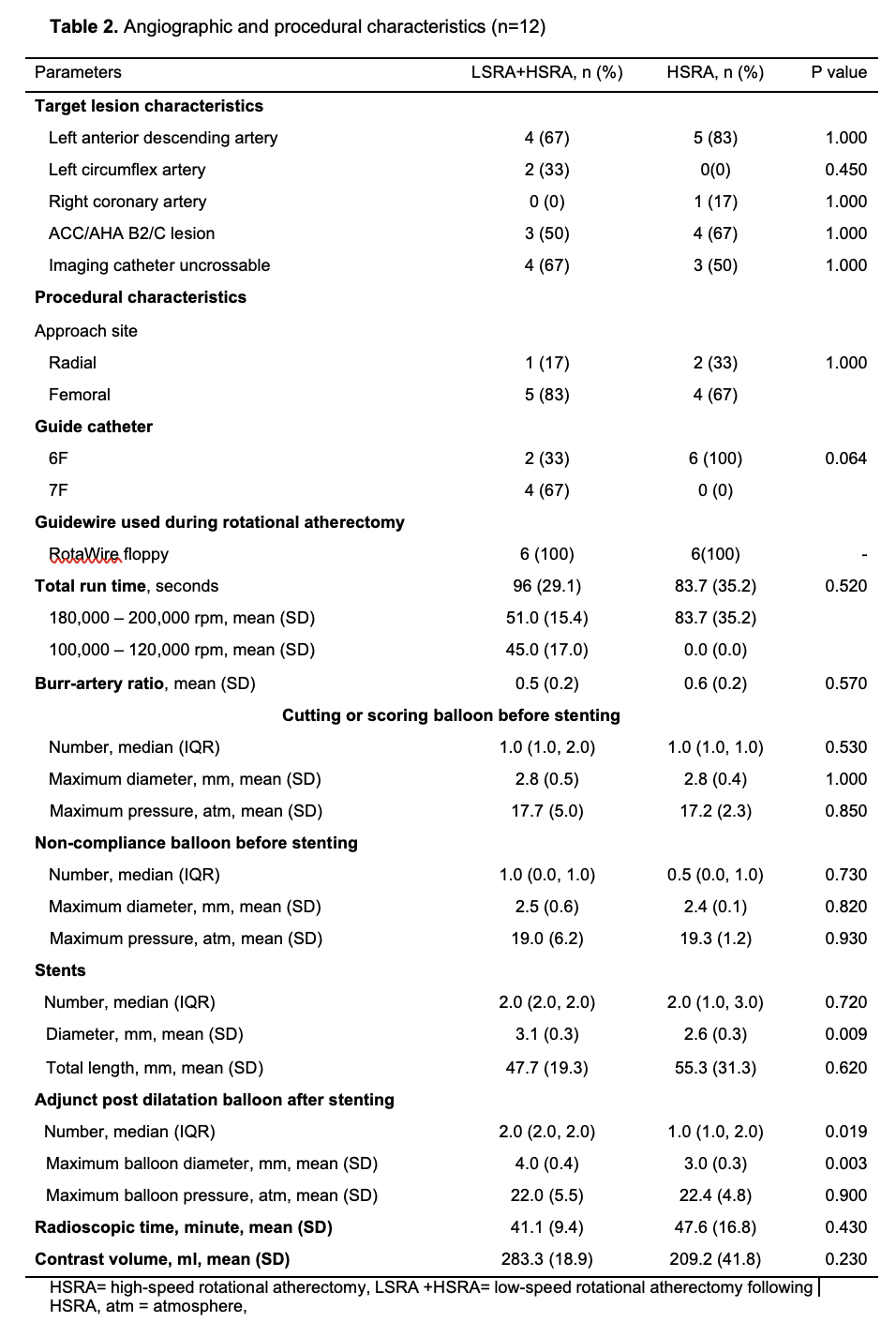 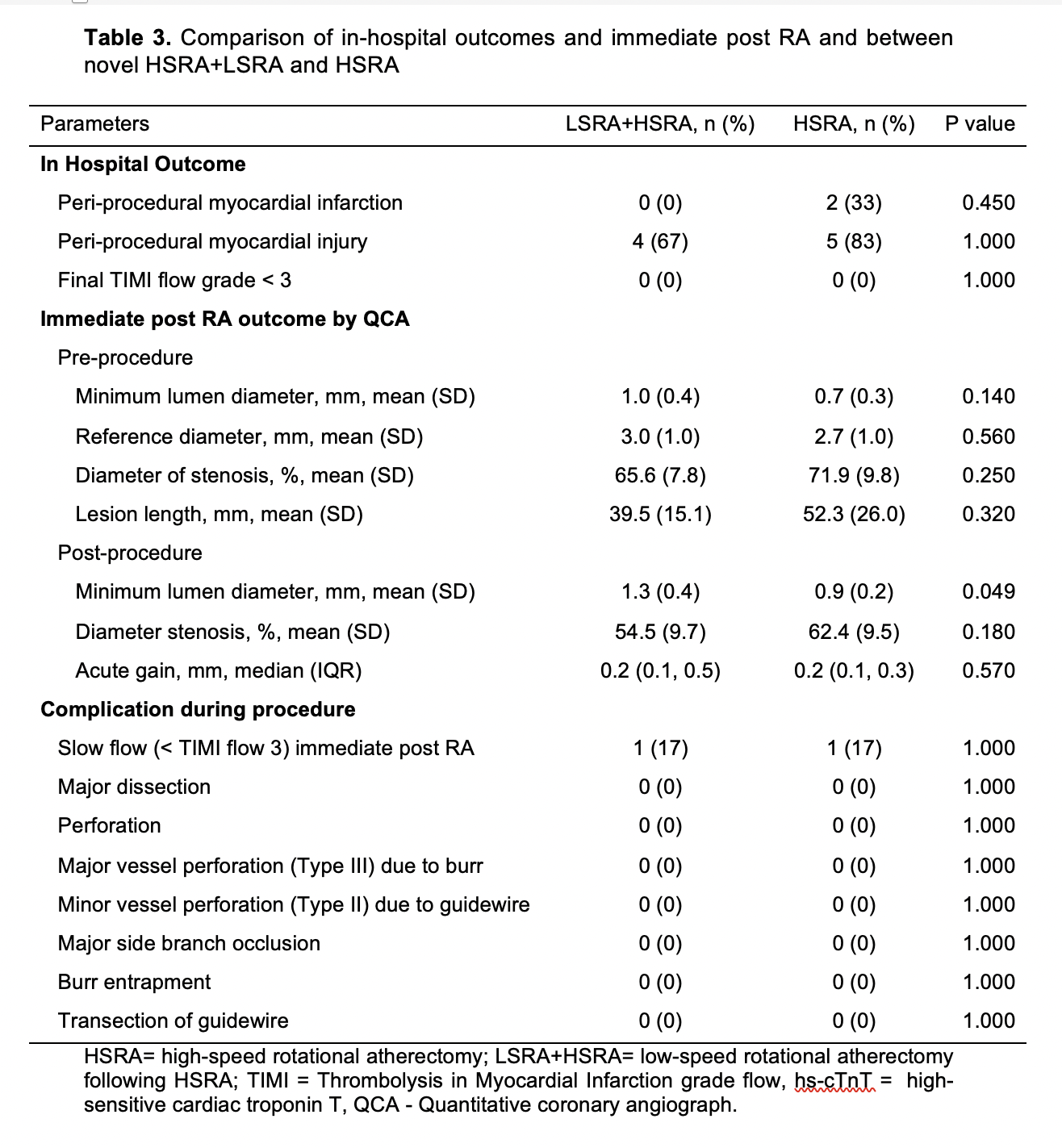 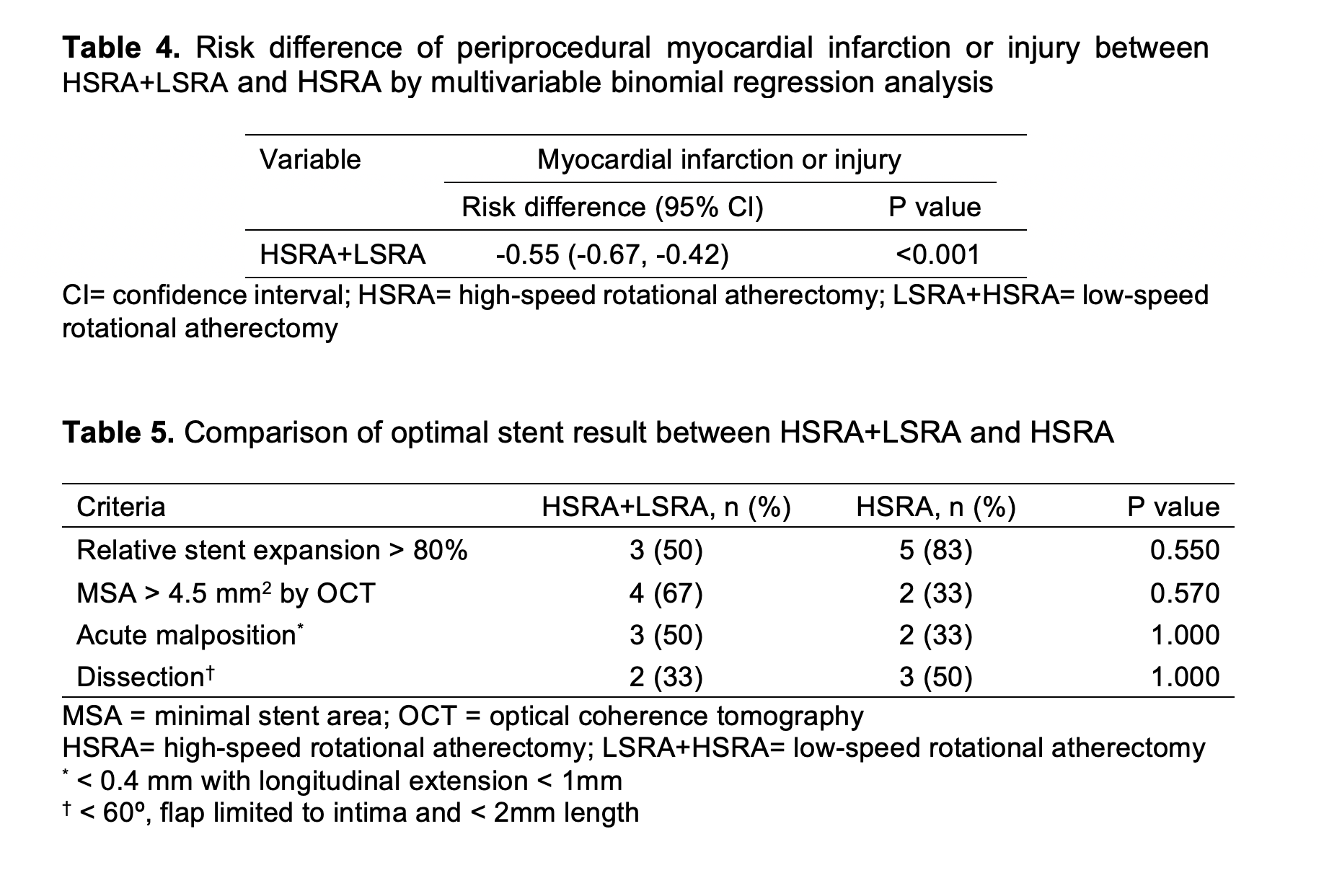 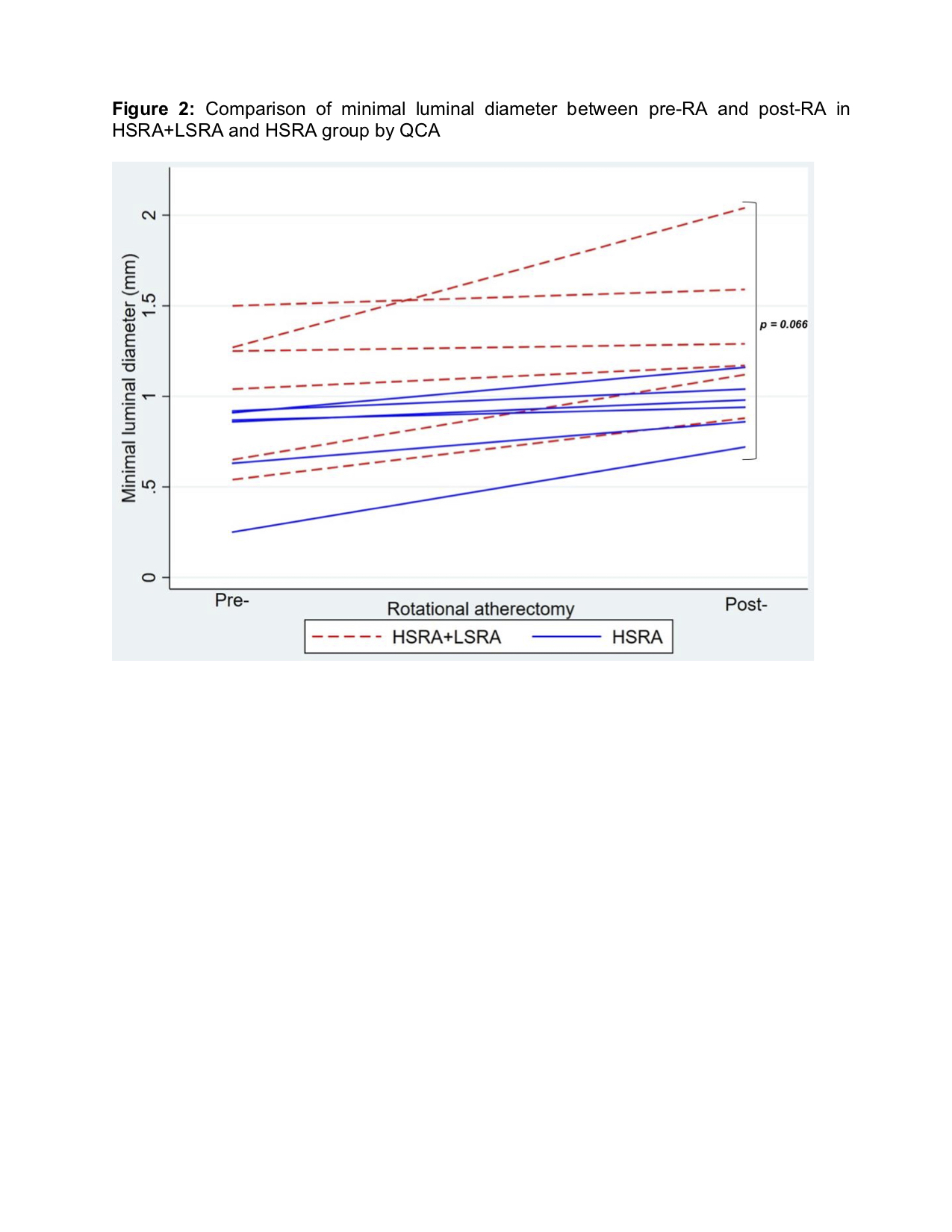