A 62-year-old female presented to her local district general hospital (DGH) with a 2-day history of shortness of breath and a productive cough. Previous medical history included chronic obstructive pulmonary disease (COPD), type II diabetes mellitus, hypertension and obesity.
After starting oxygen therapy, her consciousness level deteriorated. She was transferred to intensive care unit (ICU) for non-invasive ventilation and ongoing medical management for treatment of an infective exacerbation of COPD.

A CVC was inserted with ultrasound guidance. The procedure was difficult due to the patient’s large body habitus and although the guidewire appeared slightly kinked upon removal, the line bled back and flushed easily.
A post-procedural chest radiograph demonstrated left lung consolidation, but also raised concerns of CVC misplacement. CVC blood gases were identical to those from an arterial line and arterial waveforms were present when a transducer was connected to the CVC. A CT angiogram of the aortic arch showed the CVC approach the right subclavian artery/crutch of the brachiocephalic trunk and then enter the aortic arch.
An intravenous heparin infusion was commenced and the patient transferred to a tertiary vascular unit.
Endovascular repair was deemed too high risk given the possibility of multiple vessel injuries and complexity of repair. Her significant comorbidities and clinical condition also made her a poor candidate for extraction of the CVC via open surgery with a sternotomy.
Instead, it was decided the safest surgical approach was to dissect down to the CVC entry point into the thorax, tie it off at this level, then fix and bury the line in the sternocleidomastoid muscle with the aim of it fibrosing over. This operative plan was performed without complications. Following surgery lifelong oral antibiotics and anticoagulation were initiated, in order to prevent the risk of infection or thrombus formation. At 6 month follow up the patient remains well. 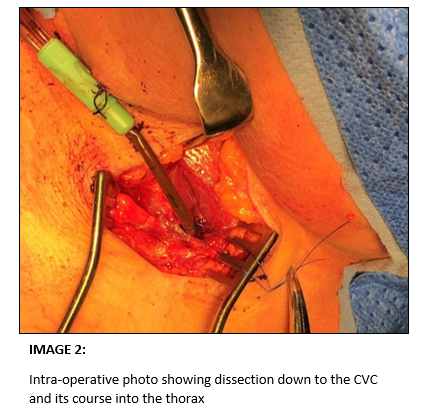 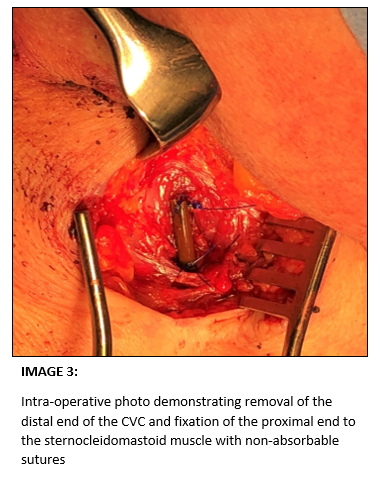 CVC malposition is defined as the catheter tip being placed outside of the superior vena cava. Misplacement has been reported in the mediastinum, pleura, pericardium, trachea, oesophagus and subarachnoid space.
Treatment options of CVC iatrogenic arterial injury depend on the patient, clinical situation and extent of vascular injury; however, they include CVC removal and external compression, endovascular repair, or open surgical exploration.
Although rare, vascular complications following CVC insertion can lead to considerable morbidity and mortality. If concerns of iatrogenic arterial injury arise, we recommend leaving the CVC in situ and seeking prompt vascular surgery advice.