Closure of an Iatrogenic RVOT Injury by Amplatzer Vascular Plug

An 89- years old female with history of diabetes mellitus, hypertension presented to our emergency department with symptoms of severe dyspnea for three days. At presentation, shock status was also noted. The chest radiography revealed enlarged pericardial shadow and blunting of left costophrenic angle. A Computed tomography of chest was done later and showed consolidation of left lower lung and pericardial effusion. Bedside echocardiography (ECHO) revealed pericardial effusion with right ventricle compression and pending cardiac tamponade was highly suspected. Due to this critical condition, pericardiocentesis was performed by para-sternal approach and a pigtail catheter was inserted. However, malposition of the drainage pigtail catheter was suspected immediately when aspirate showed frank blood and lower blood pressure developed. The repeat ECHO showed the pigtail catheter might be misplaced into right ventricle. Fluid challenge and blood transfusion were given and emergent consult of cardiovascular surgeon for open surgery was done. However, due to advanced age and poor general condition, high surgical risk of open surgery was informed. After discussing with the patient, a decision was taken to percutaneous close the perforation. 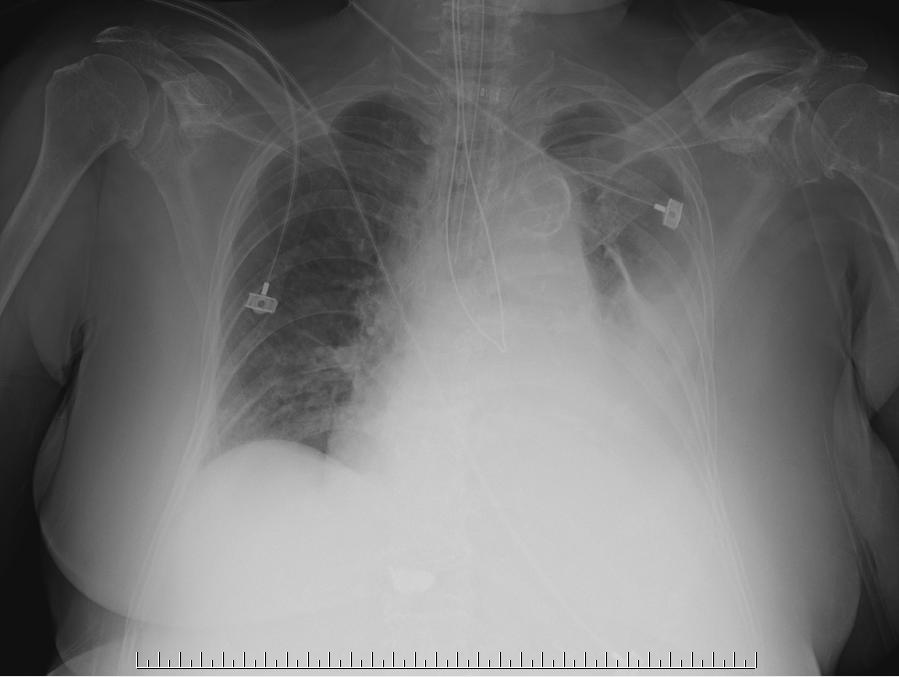 A computed tomography of chest was done later and showed consolidation of left lower lung
and pericardial effusion with small size of Right Ventricle chamber.

The study by fluoroscopic at cardiac catheterization room suspected pigtail catheter might be misplaced into right ventricle
A contrast injection through the old pig-tail revealed pulmonary trunk, thus confirming its position in the right ventricle outflow tract.

At the beginning, a new pigtail was inserted into pericardial space successfully through subxiphoid approach under fluoroscopic guidance.The Intra-cardiac pigtail was removed over a 0.035 Terumo Super Stitch wire and followed by a 6 French sheath insertion. We first deployed distal disc and pull this device back tightly to make sure the distal disc contact well to the vessel wall. After that, we deployed second disc and closured right ventricle perforation by 6mm amplatzer vascular plug successfully.

Pericardiocentesis with pericardial drainage could be a lifesaving and relatively safe procedure. Nevertheless, complications are not rare and can sometimesbe difficult to handle, such as cardiac perforation. Percutaneousdevice closure is a feasible approach forinadvertent perforation of RV duringpericardiocentesis and should be consideredas an alternative to open surgery.