The most classic and accepted definition of CIN is either an increase in serum creatinine 0.5 mg/dL or 25% above the basal value within 48 hours of contrast media administration.Renal function usually returns to baseline within one to three weeks after the administration of CM and hardly requires acute dialysis treatment. Although CIN, while normally considered a transient event in clinical practice, many clinical studies have shown that there are many adverse consequences such as higher mortality rates, prolonged stay in hospital, other cardiac complications, and worsening of chronic renal failure.It is recognized that patients treated with primary coronary intervention are at a higher risk of developing CIN in contrast to those undergoing elective PCI. Previous comorbidities such as diabetes mellitus causing pre-existing glomerular damage, anemia, higher contrast volume are recognized major risk factors.A number of scoring systems are used for the risk stratification. Mehran et al have introduced a periprocedural CIN risk scoring system that has been validated in a large cohort study. In Sri Lanka, only a limited number of patients suffering from STEMI are able to undergo optimum treatment of revascularization in form of primary or rescue PCI due to limited resources. Development of CIN in this category would devalue the benefit meant to be achieved with PCI. Furthermore, less attention is paid to applying preventive measures of CIN in an acute coronary syndrome, in contrast to patients undergoing elective PCI. Therefore, it is important to identify the incidence and high–risk patients and to apply appropriate measures to minimize the occurrence of CIN. However, there are no prior studies done involving patients with acute STEMI to assess the development of CIN and risk predictors in Sri Lanka. At the same time, data are sparse comparing the occurrence of contrast nephropathy among Primary and the Rescue PCI groups worldwide. 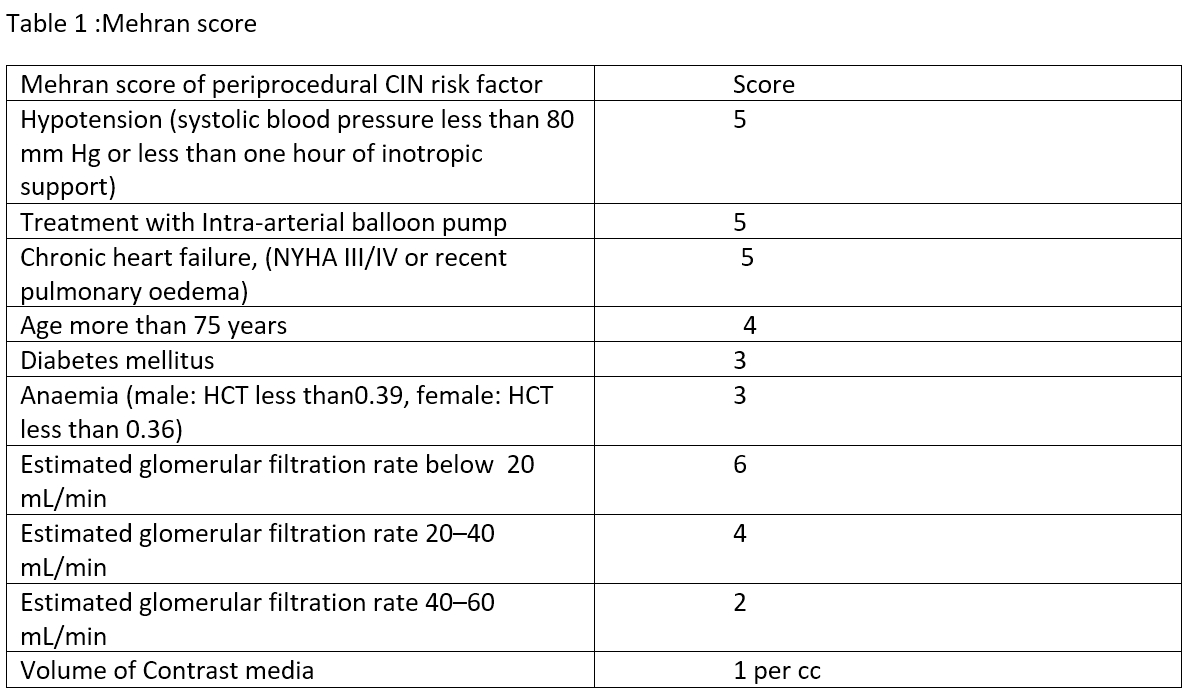 In this observational prospective study, we have enrolled 245 patients who admitted to the CCU for primary coronary interventions from May to August 2019. Data was collected from 237 patients with acute STEMI who were eligible to the study and underwent primary, rescue or pharmacoinvasive PCI within 24 hours safter acute STEMI admitted to the Institute of cardiology of NHSL. Patients below 18 years, diagnosed patients with ESRF with regular hemodialysis and exposure to contrast media in 30 days prior to enrolment in the study were excluded. The ethical clearance is obtained from the Ethics Review Committee of NHSL and informed consent was obtained from all patients. An echocardiogram was performed and a full blood count, serum creatinine was measured before contrast administration and serum creatinine was monitored 48 to 72 hours post-operatively. The use of dual antiplatelet therapy, atorvastatin, beta blocking agents, angiotensin converting enzyme inhibitors, diuretic and intravenous fluid was decided by the CCU cardiologist according to the clinical status and international guidelines. e-GFR was calculated using the Chronic Kidney Disease Epidemiology Collaboration(CKD-EPI) formula.
Coronary angiogram and intervention were performed by the interventional team, according to the standard clinical practice via radial or femoral access. Rescue PCI was performed at least four hours after Tenecteplase therapy. Each patient received a bolus of intravenous heparin 3000 i.u followed by additional amount depending on the body weight.The Social Statistics Statistical Package (SPSS -24.0) was used for data analysis. Standard deviations of the mean values were used to express the continuous variables whereas the categorical data were expressed as absolute values and percentages. Group comparisons were performed using the Chi-square test and fisher-exact test for categorical variables and the Student t-test for continuous variables. A multivariable logistic regression model was applied to assess the correlation and a P-value < 0.05was considered as statistically significant. 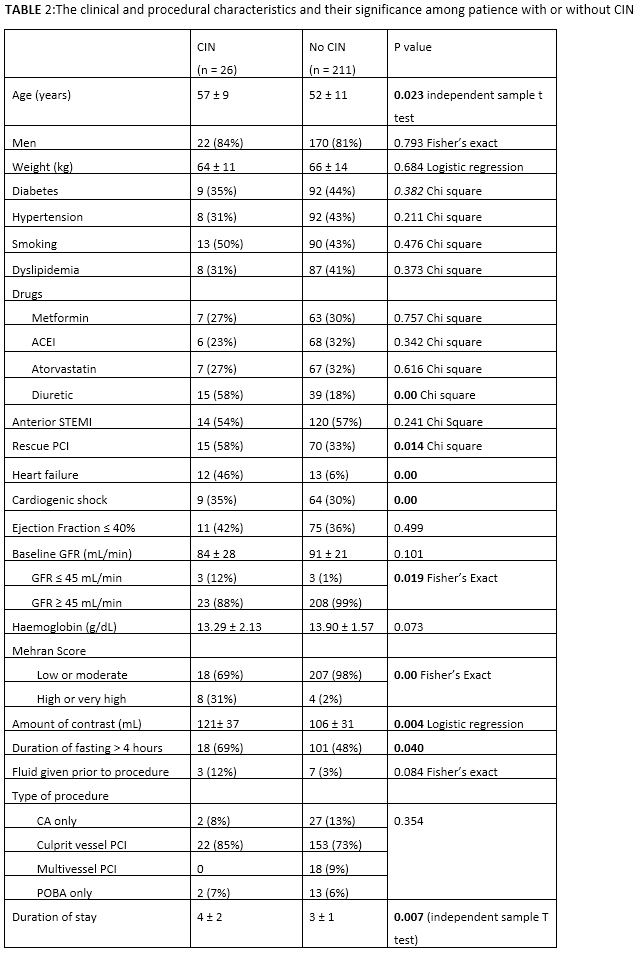 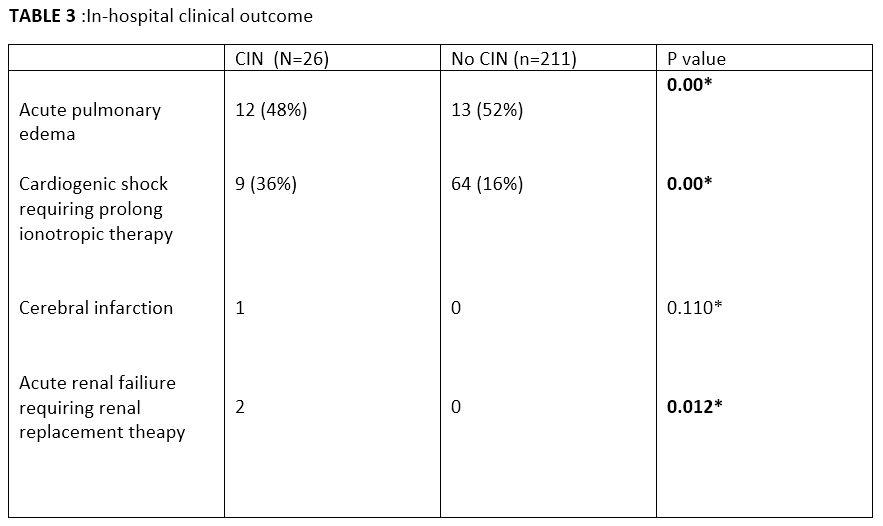 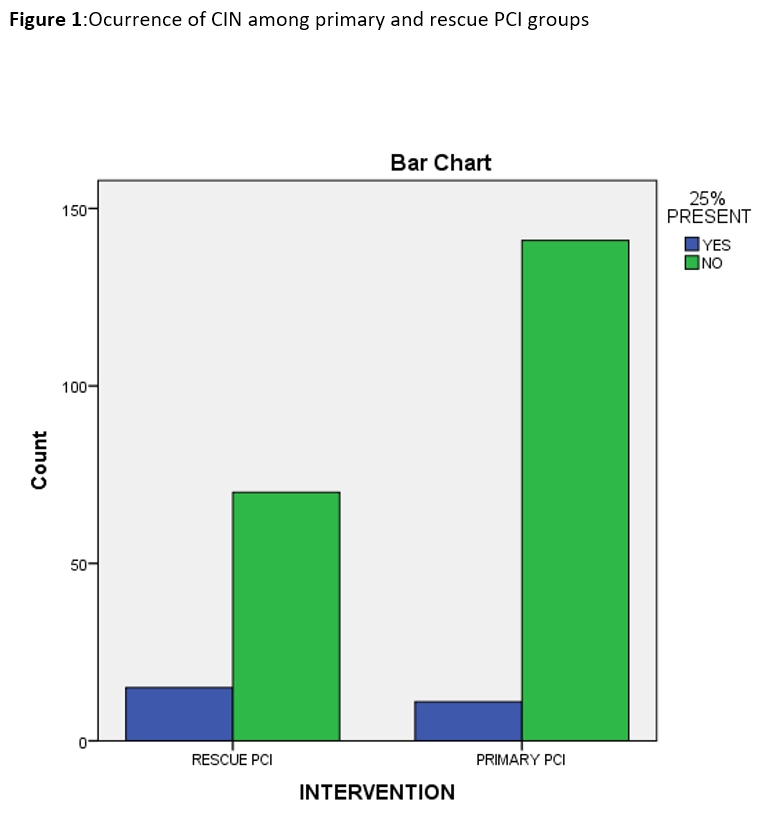 The incidence of contrast nephropathy among patients underwent primary and rescue PCI is 11% irrespective of their baseline creatinine value.CIN has increased in-hospital morbidity, estimated healthcare spending and longer hospital stay. However, the in-hospital mortality rate of the study population was 0%.The increased in-hospital morbidity was related to the development of cardiac complications such as Acute pulmonary edema and Cardiogenic shock, cerebral infarction andAcute renal failure. Not only CIN increases the duration of the hospital stay (4.15 ± 1.8 vs 3.10 ± 0.91, p=0.007) but also adds more cost to it as they need repeated investigations, referral to other specialties, and therapeutic procedures such as renal replacement therapy.The independent variables for the development of CIN in patients underwent PCI were age, contrast volume and established kidney disease with low glomerular filtration rate. However, this study does not reveal any significant association of development of CIN among diabetics or metformin therapy.In our study, most patients underwent primary PCI than rescue PCI (64.1%) vs (35.9%). However, the development of CIN was more among patients underwent rescue PCI after thrombolytics compared to the primary PCI. It has not been clear whether this is due to the thrombolytic agent itself, or other associated factors such as prolong fasting, longer time to reperfusion. Few studies have demonstrated a positive correlation between CIN and longer time for reperfusion in acute STEMI. In addition, our study has shown that Mehran score reflects the high-risk category with statistical significance and can be used as a tool to identify high risk individuals, particularly in those who undergo rescue PCI as it permits time to get the necessary laboratory results.Thus, high risk patients should be identified and treated with recommended preventive measures where possible.