Thrombus is an omnipresent danger during PCI of STEMI patients. Over the years, there have been various pharmacologic agents to manage thrombus which includes thrombolytic agents, oral and injectable antiplatelet agents, heparin, LMWH and bivalirudin. Additionally, during PCI, there is scope for mechanical thrombus aspiration by dedicated aspiration catheters. The main concern during PCI is dislodgement of thrombus downstream or upstream during balloon dilatation causing vessel occlusion and the dreaded no flow/slow flow phenomenon. Thrombus aspiration enjoyed a phase of widespread acceptance until the publication of two trials(TAPAS, TOTAL)and one registry data(TASTE), which concluded that there was no advantage of thrombus aspiration in PCI. Thus thrombus aspiration is thus no longer a class I recommendation in the ACC or ESC guidelines.Based on our own experience and observations we strongly feel however that in certain subsets namely large caliber proximal vessels>3.5mm(LAD, dominant LCX, dominant RCA) with late presentations(>6hrs) and high thrombus burden, thrombus aspiration still has a significant role to play in the execution of a safe PCI In such cases, POBA can displace the thrombus distally or more dangerously proximally into the LMCA from the ostio-proximal LAD and LCX arteries. Apart from thrombus aspiration we also describe our technique of graded balloon pre and post dilatation in STEMI-PCI to avoid disintegration and dispersal of residual thrombi downstream.We present a series of illustrative cases where thrombus aspiration dramatically altered the coronary flow and significantly improved our final result. 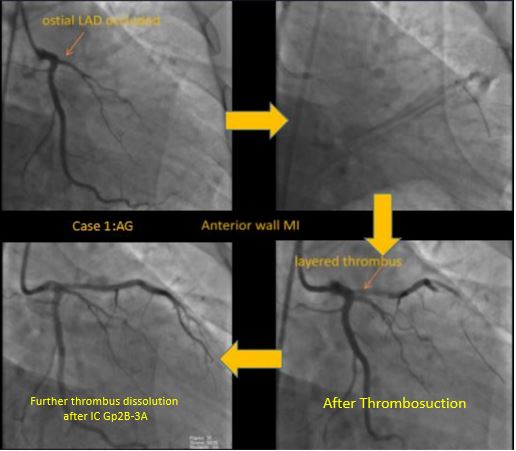 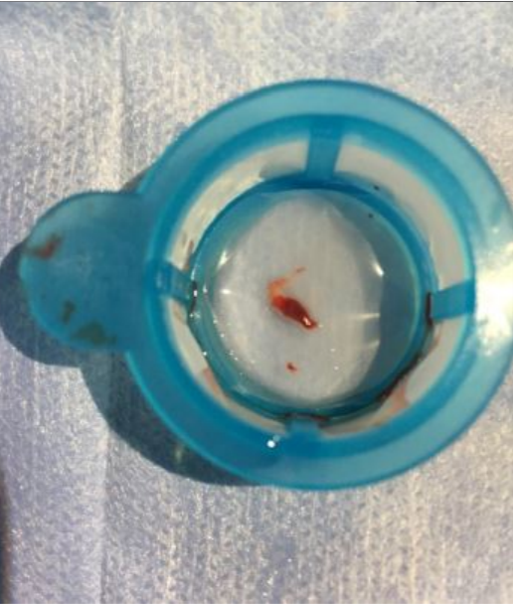 Over six months, between September 2018 to February 2019, 45 cases that underwent primary angioplasty at our institute were analyzed for contemporary methods of thrombus management. All patients were loaded with 180mg of ticagrelor and 75mg of aspirin and received intravenous heparin 100units/kg body weight after obtaining vascular access. After wire passage across the lesion, thrombus aspiration was done in selected large caliber arteries with suspected high thrombus burden as described above. Intracoronary GpIIb-IIIa, nicorandil, nitroglycerine, sodium nitroprusside, was used as per operator discretion. Graded predilatation was done for bed preparation in tight residual stenosis and all stents were carefully post-dilated for good apposition. Typically, small caliber balloons( 1.5-2 mm )were used initially followed by 2.5mm diameter balloons if required. Stents were routinely deployed at 6-8 ATM over a period of 30-45 seconds to avoid slow flow. For 1:1 non-compliant post dilatation balloons were used, initially at 10-12 ATM working up to higher pressures usually up to 16 ATM if there was no development of slow flow. Final TIMI flow and myocardial blush grades were noted at the end of the procedure. Below we present 4 such scenarios/subsets where despite trial evidence to the contrary, it is quite apparent that thrombus aspiration improved procedural outcomes in this group of patients. 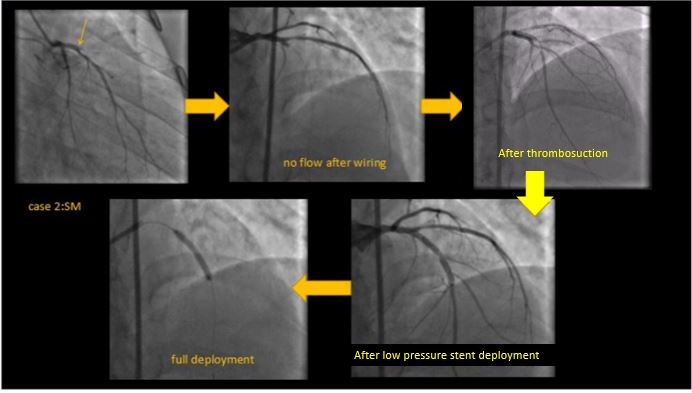 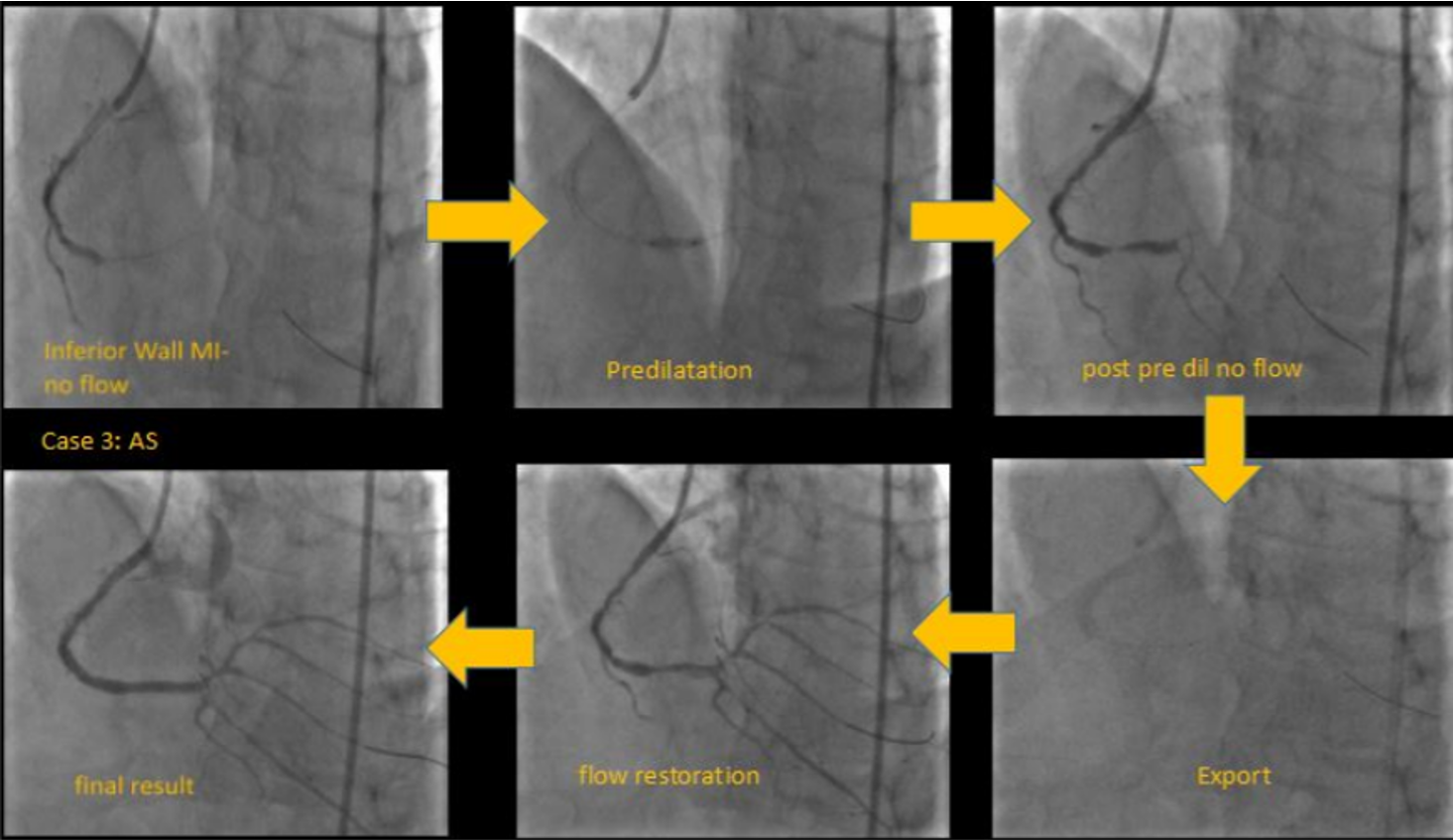 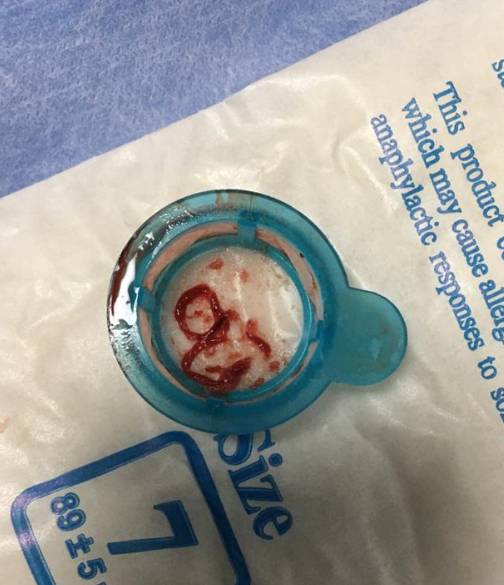 We present four representative cases with STEMI with an average time from onset of pain greater than 6hrs duration.In our first case, a 25year old cricketer presented within 12 hrs of onset of chest pain and ongoing monomorphic VT to the emergency department. After spontaneous resolution of VT, ECG showed evidence of anterior wall MI. He was taken up for a primary PTCA which revealed an ostio-proximal flush occlusion of the LAD. After wire passage,  TIMI II flow was established only after 2 rounds of thrombosuction. Intracoronary integrilin was used and patient went on to have uneventful direct stenting to the LAD.In our second case, a 44-year-old male with an anterior wall MI presented with proximally occluded LAD, with TIMI 0 flow after wire passage. Thrombus aspiration resulted in TIMI III flow with minimal residual thrombus. Here we did direct stenting by following a method of graded dilatations of the stent balloon at 6,8,10 and 12 ATM with intermittent deflations and injections to ensure we were not causing slow flow. By following this method we achieved TIMI III flow in the end.Our third case was a 34-year-old man with IWMI presenting 6hrs after onset of pain with residual severe angina. CAG showed a distally occluded RCA with no flow even after wire passage. Distal RCA was visualized via inter-coronary collaterals from the left system. Initial pre-dilatation with a 2.5X12 NC, resulted in thrombus migration to the distal PDA and PLV. This required thrombus aspiration which resulted in prompt resumption of TIMI III flow followed by successful stent implantation to RCA.Our fourth case is a large caliber dominant LCX -proximally occluded with large thrombus burden. In such ectatic vessels with large thrombus burden, there is a higher risk of distal thrombus migration. More dangerously, occasionally proximal migration of thrombus in the LMCA has resulted in severe hypotension and subsequent cardiac arrest. In such cases, thrombus aspiration helps in debulking thrombus and establishment of native coronary flow, followed by successful PCI withTIMI III flow and excellent myocardial blush grades. 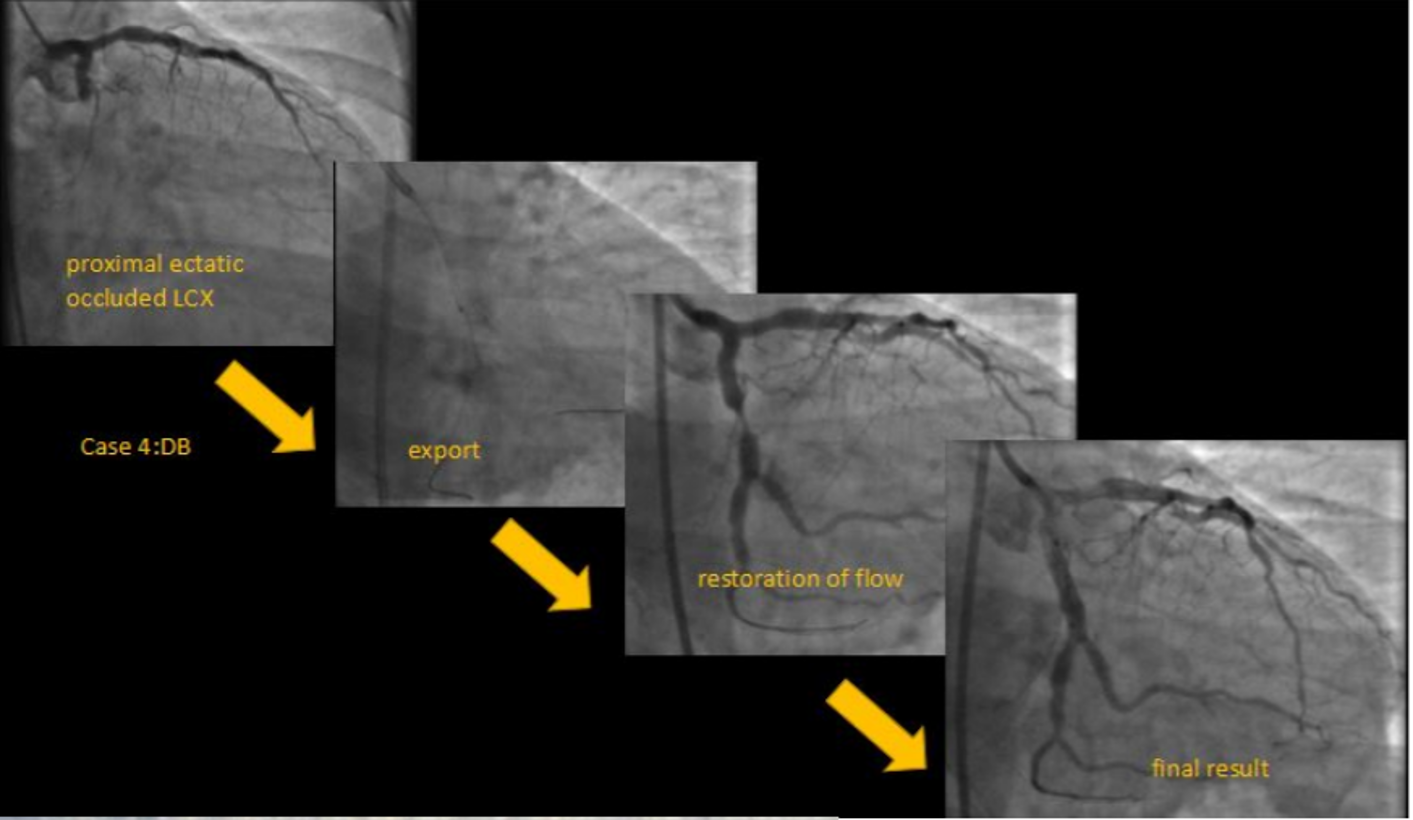 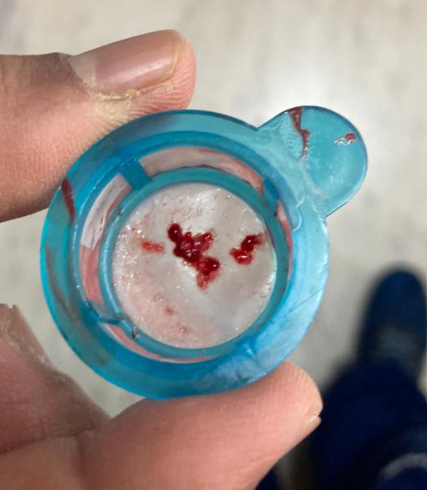 In this series of STEMI patients, we employed a number of strategies for the management of thrombus. Based on prior experience we took care to assess thrombus load, based on angiographic appearance, vessel size and duration of occlusion. We individualized our strategy based on the above features. Among 41 patients, there were 10 patients who fitted the description where large thrombus burden was suspected. Bulky thrombi were aspirated in all such cases.Once the thrombus was out of the way, graded balloon dilatations ,initially with smaller and subsequently with larger caliber balloons (1:1) was carried out with much less incidence of slow flow, no flow, with better stent apposition and consequently less risk of late-malapposition. Hence we recommend thrombus aspiration in all proximally occluded vessels >3.5 mm diameter, especially those presenting beyond 6 hours. Where the above features were not present we did not do thrombosuction but followed our strategy of careful graded balloon dilatations and stent deployment at subnomimal pressures followed by careful post dilation as described above. There was a small subset of 2 patients where thrombosuction was avoided where high organized residual thrombus burden coexisted with TIMI III flow (as shown in pic below).In such cases pre-treatment with potent antiplatelet agents like ticagrelor/prasugrel with anticoagulation for 3 to 4 days helped in thrombus dissolution and facilitated staged PCI of the infarct-related artery at a later date.This is not a randomized study and hence the results between the groups are not comparable. The practices followed are based on our previous experience. We can say that the practice of thrombus aspiration we followed in high-risk patients was safe and invariably resulted in bulky thrombi being aspirated. Furthermore, our subsequent graded pre and postdilatation strategies resulted in TIMI 3 flow and Myocardial Blush Grade(MBG) 2-3 in all of our vulnerable patients. We conclude that thrombus aspiration is not redundant in STEMI-PCI and a well-designed trial in large 3.5mm diameter proximal arteries with high thrombus burden is required to assess the utility of thrombus aspiration in STEMI-PCI.