Femoral arterial vascular access remains one of the most crucial steps to master for beginners in modern interventional cardiology. Increasing usage of radial access for coronary interventions has reduced the exposure of beginners as femoral access is infrequently being used in diagnostic and interventional coronary procedures. Despite multiple published methods and operator preferences, there still remains an unmet need for a simple and quick reproducible technique, ensuring safe zone punctures so that when the need arises interventional fellows are not found wanting. In this abstract, we describe a technique that is a combination of the palpatory method assisted by radiologic guidance. 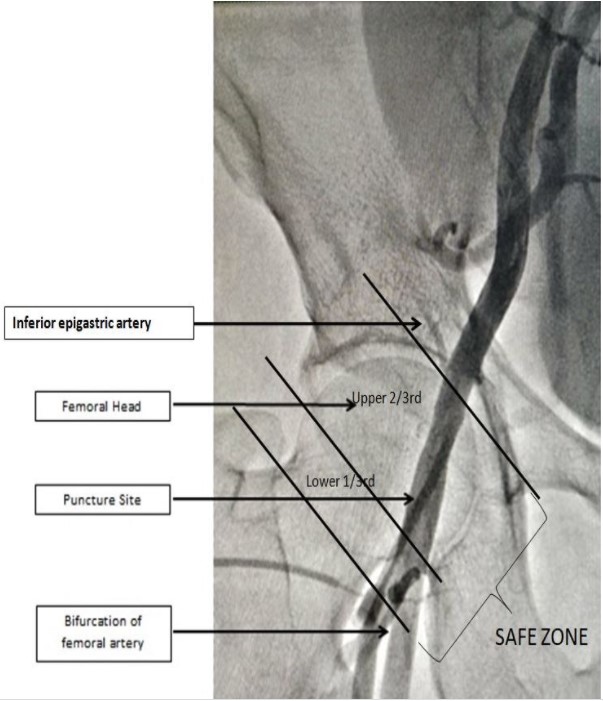 440 consecutive patients who presented for femoral interventions were randomized in 1:1 fashion to “control” and "ïntervention” groups. In the control group, patients underwent arterial puncture by the conventional Seldinger technique using the maximum pulsatility of the femoral pulse as the landmark for arterial puncture.In the intervention group, the following method was carried out to locate the site of puncture. Following aseptic precautions, the femoral head was delineated under fluoroscopic guidance. A puncture needle was placed at the junction of upper 2/3rd and lower 1/3rd of the femoral head, parallel to a line joining the greater and lesser trochanters under fluoroscopic guidance. Next, the surface puncture point was identified in a region 4 cm below the needle, where the femoral artery was best palpable. Local anesthetic was infiltrated, and vascular access obtained. Thus, in the intervention group, the location of the puncture site was determined by two variables ensuring a more restricted site of puncture compared to the control group.At the end of each procedure, a femoral angiogram was taken in both groups using diluted contrast and the site of puncture in relation to the femoral head was noted. Patients in both arms were followed up until discharge for vascular access site complications by a nurse practitioner/physician assistant blinded to the initial randomization. The study data was anonymized, coded and analyzed using SPSS 15.0 to look for rates of complications and frequency of safe zone punctures between the two arms after matching for baseline characteristics. The protocol was reviewed and approved by the Institutional Ethics and scientific committees and all participants provided informed consent. 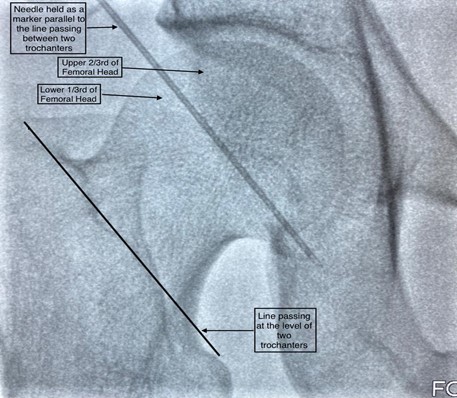 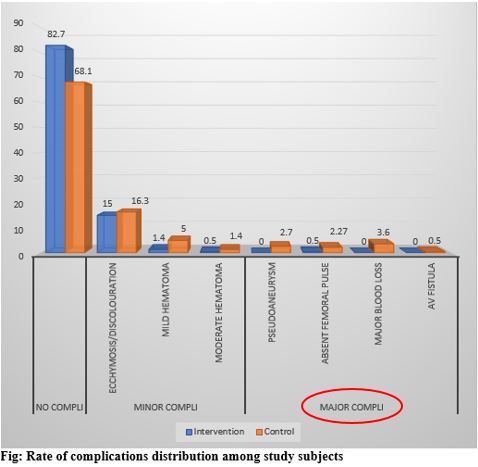 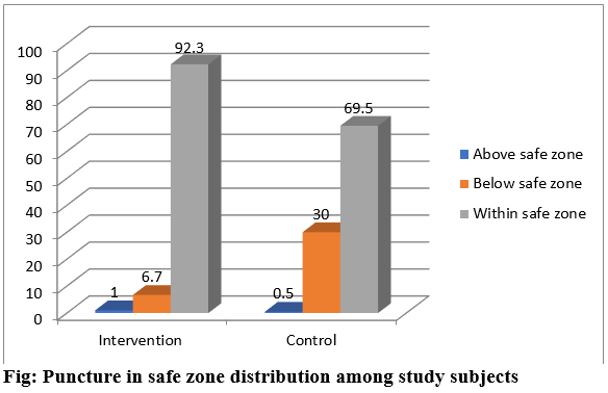 This was the first prospective randomized controlled study comparing a fluoroscopically guided puncture technique using predetermined landmarks vs. the conventional palpatory method to puncture the femoral artery. The study compared the rate of complications between the two methods with respect to risk factors like history of hypertension, diabetes, smoking, gender and increased WHR. The overall rate of complications(minor and major) was lower in the fluoroscopy guided group compared to conventional group and it was statistically significant (p<0.05) and the same trend was observed in case of major complications. This benefit was conferred due to our ability to hit the safe zone more consistently with the fluoroscopic method. Study findings conclude that this fluoroscopy guided femoral artery puncture technique is a safe, quick and convenient method to reduce vascular access site complications. This technique has particular benefits amongst high risk subjects like patients with increased WHR, diabetics and smokers where such underlying conditions may affect the access and anatomy of the femoral artery. This technique also nullifies the effect of anatomical variations on the rate of vascular access site complications as it ensures the presence of bony prominence in the form of head of femur behind the puncture site in the majority of cases thereby ensuring reliable hemostasis in an overwhelming majority of patients thereby reducing major complication rates in the intervention group to 0.5%. The technique was easy to master and execute, for entry level operators and the results were highly reproducible.
In an era of radial dominance, this simple, easy-to-master technique should help beginners in decreasing the number of access site complications. 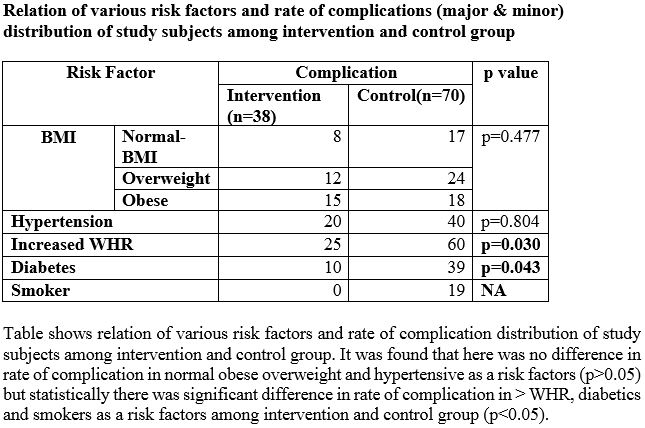