It is widely known that timely percutaneous coronary intervention (PCI) is superior to fibrinolysis in patients with ST Elevation Myocardial Infarction (STEMI). However, fibrinolytic therapy is still widely used in Malaysia due to factors such as lack of PCI-capable hospitals, logistics, and financial issues. Unfortunately, there are patients who fail to achieve reperfusion after thrombolysis and hence PCI still plays a crucial role and can be life-saving for such patients. Vascular access is then a major concern as femoral access potentially carries higher bleeding risk which in turn leads to increased mortality. Therefore, radial approach has been advocated due to lower risk of bleeding events, ease of access and reduced hospital length of stay. This study aims to look at the trend of usage, compare characteristics, safety, and clinical outcomes of radial versus femoral access in this group of patients.

This is an observational retrospective analysis. 498 patients with acute STEMI that underwent rescue PCI in the National Heart Institute from January 2007 till December 2016 were included in the study. These patients were referred from other hospitals due to failed thrombolysis. Patients’ demographics, risk factors, and procedural characteristics were evaluated. The yearly trend of radial versus femoral access was analysed. Comparison of outcomes between radial and femoral approach was done categorically on in-hospital mortality rate, MACE rate (Death, reinfarction, urgent CABG, Stroke) at 30-day, 6-month, and 1-year follow up.

Femoral access was used in 296 patients whereas radial access was used in 202 patients. Notably, femoral access was used more frequently in patients above 50 years old. In terms of gender, predominantly male (90.6% for radial and 85.8% for femoral). A pattern was seen whereby operators were more in favour of femoral access from 2007 till 2014 but subsequently switched to predominantly radial access from 2015 onwards. This change was due to an increasing trend of usage for radial approach with concurrent decreasing trend for femoral approach throughout the past decade. Femoral approach was seen significantly more in patients with history of previous myocardial infarction and heart failure, chronic kidney disease (CKD), Killip II onwards and associated with higher IABP usage. Analysis showed that radial approach was associated with lower in-hospital mortality compared to femoral approach (3% Vs 13.2%, p=<0.001). However, there were no significant differences in terms of bleeding outcomes, length of stay, 30-day, 6-month, and 1-year mortality between both approaches. Femoral access also did not significantly increase MACE within 1 year compared to radial access in STEMI patients who underwent rescue PCI (Hazard Ratio: 1.9; 95% Confidence Interval, 0.8-4.5; p = 0.164). 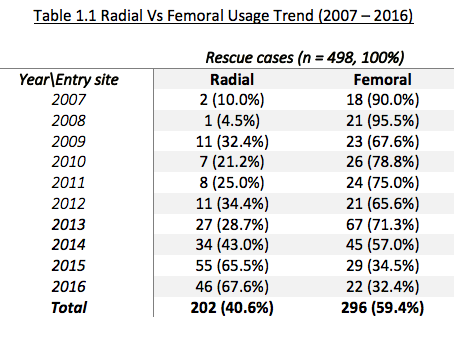 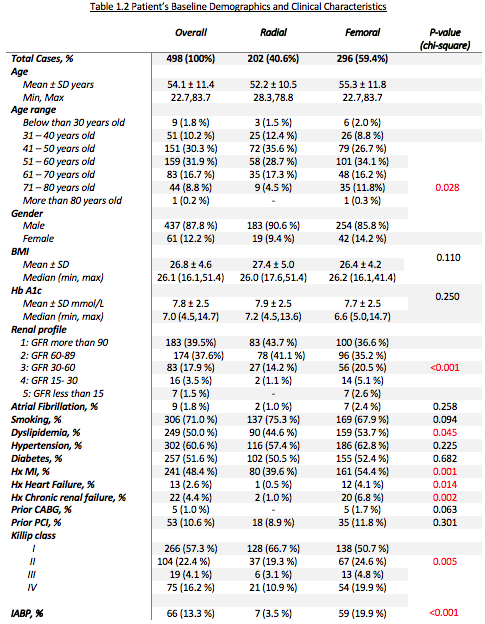 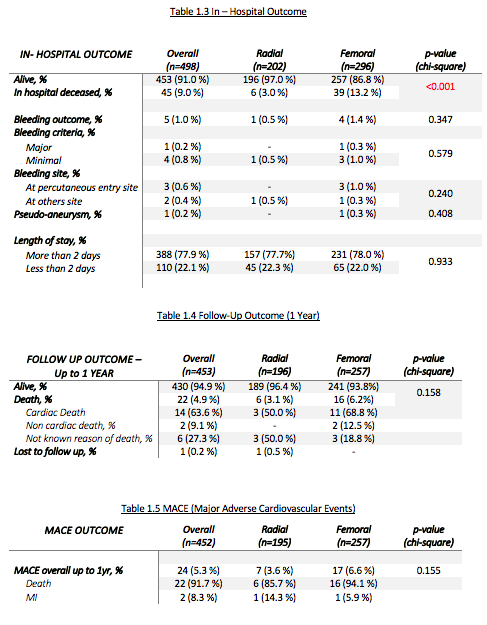 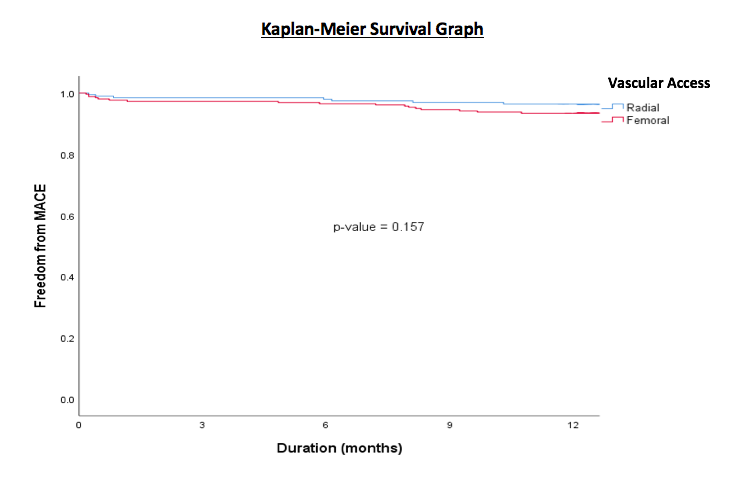 The usage trend over the past decade seems likely due to the landmark studies for benefits of radial over femoral access, improving skills and experience of operators. From this study, we can then infer that radial approach confers more favourable outcome in terms of in-hospital mortality. It is likely that the femoral approach was used in group of patients which were more ill at presentation and had more co-morbidities. Otherwise, the results in this study were somewhat similar with the recent SAFARI-STEMI study whereby there were no significant differences between the MACE outcome and bleeding events. In this new era with the Covid-19 pandemic, there is a continuous debate as to whether primary PCI should be deferred with thrombolysis-first approach being adopted in many places. Hence, this study is pertinent as operators can be assured of the similar bleeding events. In conclusion, radial approach should be attempted as long it is feasible while operators still need to be facile in the femoral approach.