Left main coronary artery (LMCA) is large vessel which supplies the majority of left ventricle and critical lesion at the bifurcation of LMCA is possible to induce occlusion of both left anterior descending (LAD) and left circumflex (LCx) arteries and subsequent life-threatening condition. Therefore, percutaneous coronary intervention (PCI) on LMCA bifurcational stenosis is considered as a high-risk procedure. In this study, we aimed to clarify the impact of urgent and elective PCI on outcomes of patients with LMCA bifurcational stenosis.

We chose patients who received urgent PCI due to acute myocardial infarction (AMI) or elective PCI due to stable coronary artery disease (CAD) for their LMCA bifurcational stenosis. Any lesion with >50% stenosis on coronary angiography was considered as critical stenosis. Bifurcational stenosis was evaluated by Medina classification. All-cause mortality was chosen for the study endpoint. Short (within 30-days) and long term (during follow-up) outcomes were compared by use of Cox proportional hazard regression and Kaplan-Meier method. 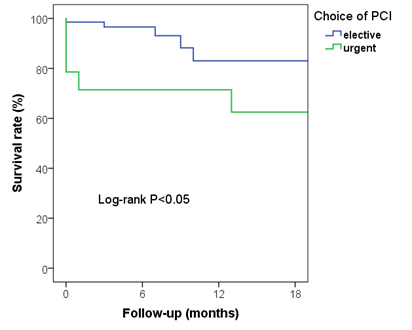