A Retrospective Case Control Study on Head-to-head Comparison Between LAAO and NOAC in Asian Population: Efficacy of Stroke Prevention and Bleeding Risk

Atrial fibrillation is the most prevalent cardiac arrhythmia, with a global prevalence of around 3% worldwide. Stroke is one of the most catastrophic complications of atrial fibrillation which carries significant mortality and morbidity.It is well established that NOAC is at least non-inferior to warfarin in terms of stroke prevention; There are also studies on the non-inferiority of LAAO compared to warfarin treatment. Head-to-head comparison between LAAO and NOAC has long been sought-after data, but was not available until recent 1-2 years with a very limited number of studies. However, they were based on non-Asian populations. It is well known that Asians are more prone to bleeding complications. How will this affect the risk and benefit ratio choosing between NOAC and LAAO is not known.Therefore, we have performed a retrospective head to head case-control trial on Asian patients, with similar risk profile, with either LAAO performed or put on NOAC. The primary objective of this study is to determine the efficacy of both modalities on stroke (overall, ischaemic, haemorrhage) prevention and bleeding risk (overall bleeding, gastrointestinal bleeding, intracranial haemorrhage).

This is a single centre retrospective case-control studyInclusion criteria:- Age ≥18 years- Patients with documented non-valvular atrial fibrillation (paroxysmal, persistent or permanent) or atrial flutter- Patients indicated for anticoagulation for stroke prevention (CHA2DS2-Vasc score of  ≥1 for men or ≥2 for women)- LAAO performed or NOAC newly started between 1 February 2013 till 1 Nov 2017.Exclusion criteria:- Patients with mechanical heart valve, moderate to severe mitral stenosis- Usage of the inappropriate dosage of NOAC (overdose or underdose)- Changing of NOAC type within the study period- Crossing over from NOAC-to-LAAO or LAAO-to-NOAC within the study period- Termination of NOAC or withholding NOAC for >7days within the study periodAll LAAO cases performed in our hospital were included in the study within the designated period, including all LAAO devices used [Watchman device (Boston Scientific, Marlborough, MA, USA), Amplatzer Cardiac Plug 1 and 2 (St. Jude Medical, St. Paul, MN, USA)]. Post-operatively, all patients were put on dual antiplatelet agents, consisting of aspirin 80-100mg daily and clopidogrel 75mg daily for 6 months, followed by lifelong single agent of aspirin 80-100mg daily.All patients newly started on NOAC in our hospital were included in the study within the designated period (2496 patients). 3 types of NOAC were included: Apixaban, Rivaroxaban, Dabigatran.
Patients with either LAAO performed or NOAC newly started in Queen Elizabeth Hospital Hong Kong between 1 February 2013 till 1 Nov 2017 were studied, and each of them was analysed for their outcome until 31 August 2018. Within the period, 100 LAAO cases(index) were performed in QEH. For every LAAO case, it was matched with 3 best matching NOAC cases(control) out of the 2496 patients included in the designated study period. A total of 400 cases were matched (100 LAAO cases, 300 NOAC cases).
Matching criteria:- NOAC newly started 30 days before or after the index LAAO case- Best matching CHA2DS2-Vasc score- Best matching HAS-BLED score- In case of 100% match of the above, cases with nearest age will be matched 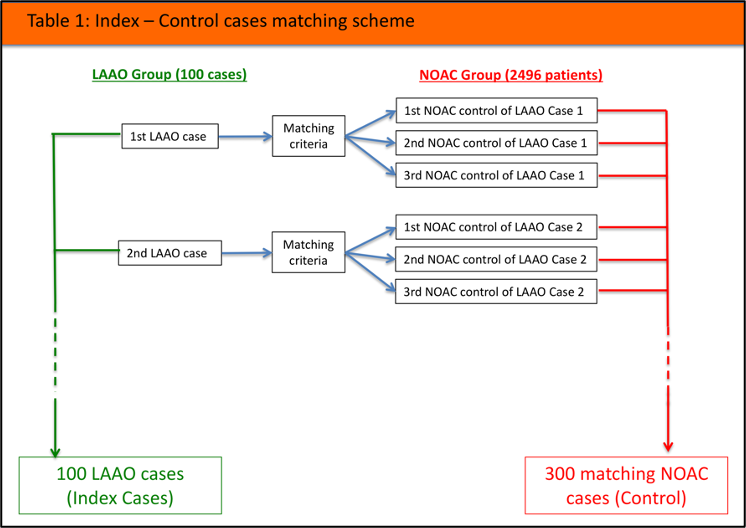 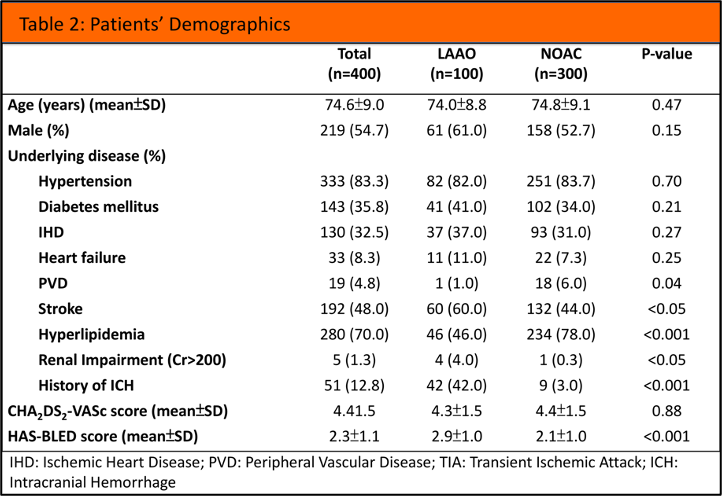 Patients’ demographics and backgroundThere was no significant difference in CHA2DS2-VASc score between the LAAO and NOAC group (4.3±1.5 in LAAO, 4.4±1.5 in NOAC; p= 0.88). However, the LAAO group had a statistically significant higher HAS-BLED score (2.9±1.0 in LAAO, 2.1±1.0 in NOAC; p<0.001). 2 brands of LAAO devices were used; 44 cases(44%) had Amplatzer Cardiac Plug(ACP) implanted while 56 cases(56%) had Watchman device implanted.
Within the 300 matched cases of NOAC, 3 types of NOAC were used. 45 patients (15%) were put on Apixaban, 146 patients (48.7%) were put on Dabigatran, 109 patients (36.3%) were put on Rivaroxaban. The mean follows up duration of the LAAO group was 32.2±14.7 months, while that of the NOAC group was 31.1±15.6 months.
Outcome:There were 3 cases(3%) of stroke in the LAAO group, 1(1%) was ischaemic and 2(2%) were haemorrhagic. There were 9 cases(3%) of stroke in NOAC group, 4(1.33%) were ischaemic and 5(1.67%) were haemorrhagic.There was no significant difference in stroke risk(p=0.98), ischaemic stroke risk(p=0.78) and haemorrhagic stroke risk(p=0.84) between the LAAO and NOAC group There was significantly more gastrointestinal bleeding(p<0.005) and overall bleeding(p=0.02) in the NOAC group when compared to the LAAO group. However, there was no significant difference in risk of intracranial hemorrhage(p=0.98)
Multivariate analysis was performed on overall bleeding, which showed that the odd ratio of overall bleeding of LAAO group was 0.19 (p=0.02) when compared to NOAC group, translating to a relative risk reduction of 81% in overall bleeding
The severity of bleeding was further classified according to the TIMI bleeding scale, which showed there were significantly more cases with bleeding that ‘required medical attention’ in the NOAC group (0% in LAAO group, 6% in NOAC group; p=0.01). There were, however, no statistically significant difference in major, minor and minimal bleeding. The relative frequency of bleeding of the LAAO and NOAC was 2% and 11.6% respectively. Among the bleeding cases in NOAC group, majority of which was categorised as 'requiring medical attention' (52%) based on TIMI bleeding scale. 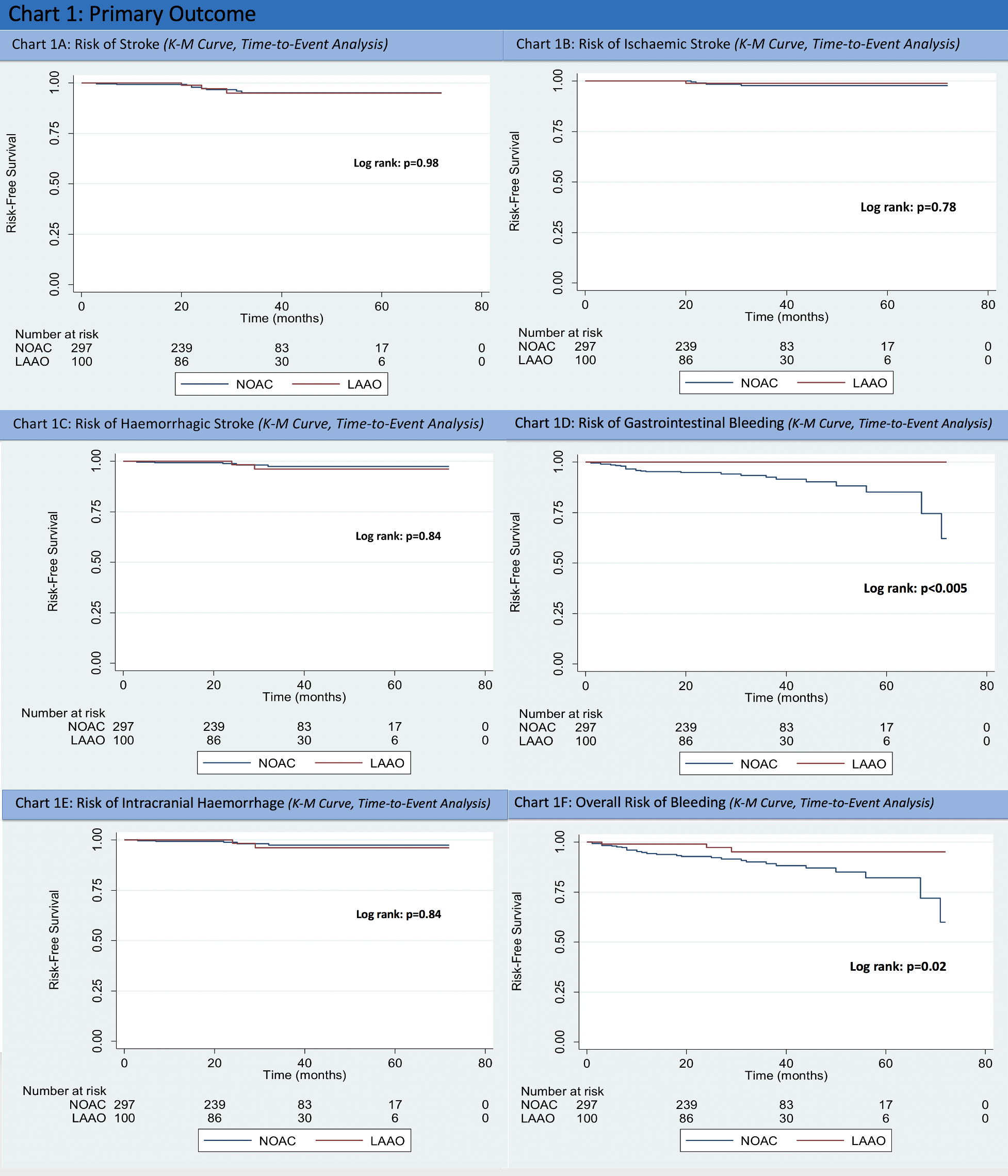 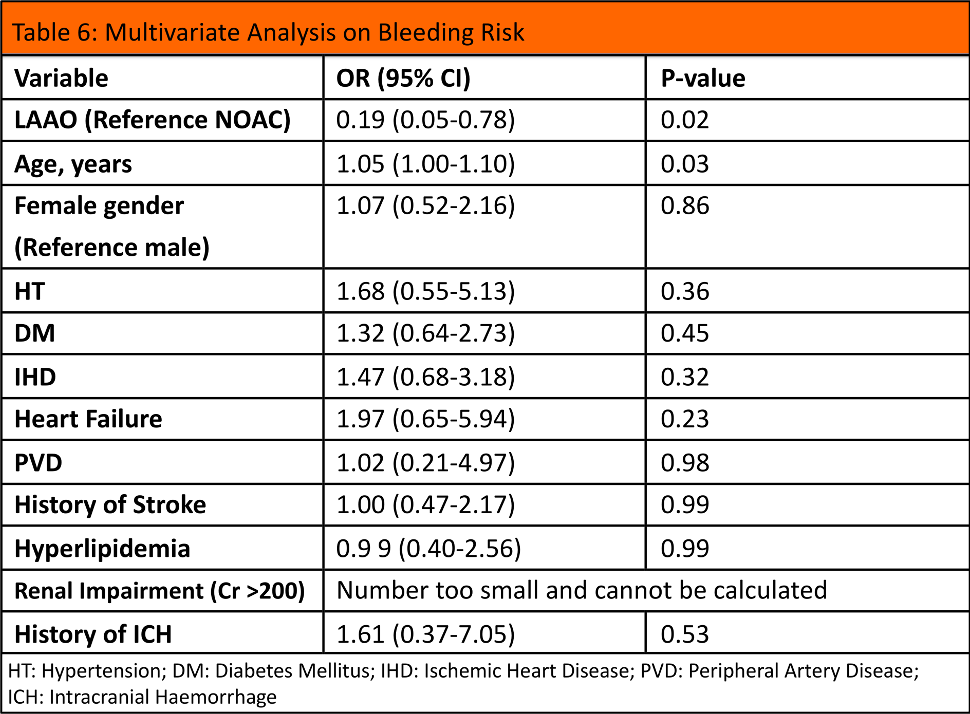 Rationale behind Methodology/matching:Due to relatively small number of LAAO cases (100 cases) and relatively large sample size of NOAC group (2496 cases) for matching, matching in 1:3 ratio, instead of 1:1, was chosen; in order to minimise sampling error for the NOAC matching cases.In order to fairly compare the stroke and bleeding risk of the 2 study groups. 3 criteria have to be matched:Firstly, 2 groups of patients must have similar baseline stroke risk. Propensity matching was considered but deemed less favourable. CHA2DS2-Vasc score is currently the most recognized scoring system for estimation of stroke risk in AF patients. The stroke risk attained by a patient having hypertension(1 point) should be similar to another patient suffering from peripheral vascular disease(1 point). However, with propensity score matching, a patient having hypertension would be regarded differently from one having peripheral vascular disease. Ideally, patients with same CHA2DS2-Vasc score plus identical score component should be matched, but will require an extremely large sample size for successful matching. Hence, in order to align the baseline stroke risk, the CHA2DS2-Vasc score, irrespective of individual scoring component, was used for matching. Secondly, 2 groups of patients must have similar baseline bleeding risk. Matching of HAS-BLED score was used instead of propensity score matching, with the same rationale as above. Finally, 2 groups of patients must have similar follow-up duration. With a different intervention-to-analysis duration, both stroke and bleeding risk could not be fairly compared.
Conclusion:In this retrospective case-control study, we found that LAAO had similar efficacy in overall stroke, ischaemic stroke and haemorrhagic stroke prevention when compared to NOAC (Rivaroxaban, Apixaban, Dabigatran). Yet, the LAAO group had significantly less gastrointestinal bleeding and overall bleeding risk(with relative risk reduction of 81%), in which 80% of bleeding were TIMI grade of ‘requiring medical attention’ or more. However, no difference in risk of intracranial haemorrhage was demonstrated between the LAAO and NOAC group in this study.